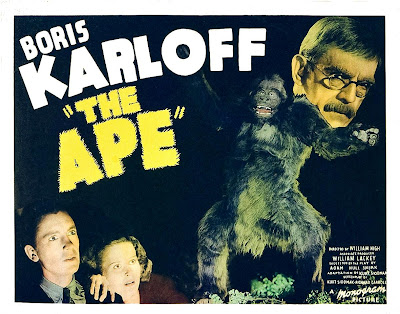 This one is from the same director who did the awful Bela Lugosi mad scientist anti German film The Black Dragons and Boris Karloff's Doomed To Die. This guy doesn't have a very good track record as far as I'm concerned and I hope I don't force myself to sit through anymore of his under par films anytime in the near future. I suppose I like this film slightly more then the other two I mentioned but that's just because it has a killer gorilla running around in it.

Yet again Boris Karloff is the star and this time he plays a mad scientist named Dr. Bernard who's new serum is supposed to help cure Polio. The only problem is that the serum is a concoction of human spinal fluid and who knows what else. Bernard has been in trouble with the law before for his strange experiments on human cadavers spinal column. He continues at his goal and his life long ambition to help a girl get out of her wheel chair and walk again. The main problem with Karloff's character in The Ape is that he is too kind. Its hard to take him as a madman when he loves children and just wants to do good for mankind. On the other hand we have a giant killer gorilla on the loose. We first see The Ape in what is probably the best scene in the movie. A man is teasing the giant ape and poking him with a stick. When a passer by sees that The Ape is being abused he yells at the man to put the stick down. The man replies "He killed my father and I'm never gonna let him forget it". Of course the man in the monkey suit strangles the idiot with the stick and breaks out of his cage. The rest of the movie is down hill and pretty boring from here. Karloff ends up saving the day in his own way but of course everybody still refers to him as mad Dr. Bernard.
The Ape can easily be skipped you wouldn't be missing much. If only I had enough respect for myself to not sit through em all. 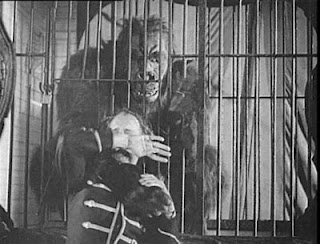