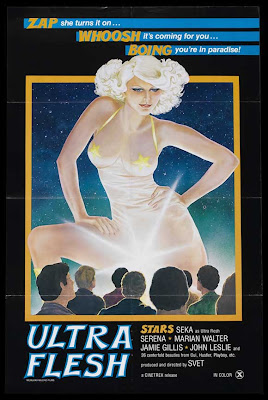 Remember when filmmakers actually put some thought into pornography and tried to come up with something original? Well it doesn't get much more original then Ultra Flesh. This 1980 porn flick is a sci/fi comedy with all kinds of crazy happenings.
The people of Earth have become impotent due to a diabolical alien named Mr. Sugarman (Jamie Gillis) from the planet "Freon". Sugarman has contaminated the worlds sugar supply leaving the Earthlings in a limber state. Seka plays a sort of super hero alien named Ultra Flesh who cures intergalactic problems through penetration. It is up to Seka to save the people of Earth from the evil Mr. Sugarman.
Seka or Ultra Flesh shoots laser beams from her red hot pussy at the nearest male crotch causing them to become erect once again, While Jamie Gillis is able to freeze people with his ice cold cock. Sugarman & Seka have a sort of showdown or fuck-down to the death. Will Seka's red hot pussy melt Gillis's frozen member or will Sugarman leave her looking like a ice cube? I won't tell you how the great battle ends.
Ultra Flesh also stars Luis De Jesus who most would remember as Ralphus the demented midget in Blood Sucking Freaks. Once again De Jesus plays a villain and this time we get to see him run off with a baby carriage and send it flying into a lake. He also performs a rape scene involving another midget and a python. De Jesus fans will not be disappointed. He has plenty of screen time where he runs around causing all sorts of trouble. In one scene he runs around under a table at a diner party and performs some oral sex on the ladies. John Leslie & Ron Jeremy both show up in this one and we get a good performance from both of them.
Some of the other highlights you have to look forward to is a political conference between world leaders in a bumper-car match, A big fat naked woman rolling down hills and running nude through the snow. A perverted farmer who chases his livestock around with an erection, a bunch of strange looking alien dudes, A giant exploding penis on wheels, A cool 70's esque orgy involving midgets, bondage and whips, occasional artsy camera work and a unique soundtrack.
If ya ever wondered what it would be like if Star Trek had some hardcore sex in it. Your answer is right here. Check it out for some strange intergalactic sex with Seka & Gillis. 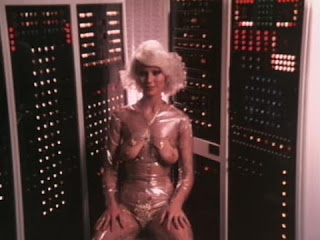