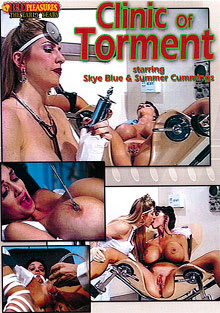 I took this thing out off of the fetish shelf from my store because the I wanted to be disturbed. Plus the case was different then the one that I posted above and the back had a description that lead me to believe there was some sort of a story. Usually I am not mislead by marketing schemes but this time I was a victim of circumstance. What I got was not a filthy classic porno film but a hour or so long scene at a doctors clinic and since I am not the kinda guy who is even remotely turned on by B.D.S&M or bondage or any type of sexual torture, Clinic Of Torment was a pretty rough sit through for me.
For 60 some odd minutes I had to rough it through Blue Skye and Summer Cummings, two fake titted bimbos who get off on putting eye drops in each others eyes. This was also the first time I have ever seen a nostril scope. The nurse looks down into the brunette, victims empty head through her nostrils. Not very sexy. Then there is some vagina bondage and a bit of genital piercing play. We get a whole bunch of nipple torture and a lot of whippings. Next the nurse straps a dildo to her "patients" knee and rides it. This followed by a golden shower scene that was pretty much all off screen. We see a bit of yellow spill into a bucket and then this poor excuse for a fuck-tape cuts to the bucket much more filled. The filthy video ends with a enema and the filmmakers had enough decency to not show us the shitty mess.
I almost feel that there might be a harder cut of this thing with piss and shit in it but I cant say for certain. The only thing I can say is that if does exist, I don't ever want to see it.
I'm sure there are plenty of sick bastards out there who would love to add this to their whack stack but I however learned a lesson. No more clinic porn for me, especially if its not a classic. Where is Vanessa Del Rio when you need her? 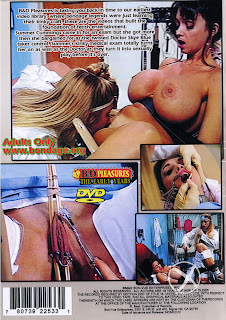