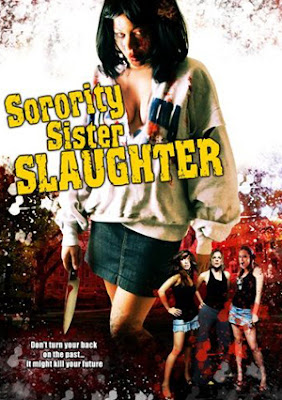 Wow this sucked! Sorority Sisters Slaughter is a tale of a girl who bleeds to death during an abortion gone wrong with a knitting needle in a bathtub at a sorority house back in the 50's. 46 years later the old sorority house is bought by a group of girls and they are killed one by one by the ghost of abortion-girl.
Sorority Sister Slaughter's cast is predominately black and although the acting could have been much worse its pretty ridiculous watching these actors try to pull off a scene set in the 50's. From the girls straightened hair to the African American jocks and their sarcastic mannerisms it comes off like modern day, just shot in black & white.

On the other hand, the abortion scene was cool. I found it slightly disturbing watching the teary eyed, desperate girl attempt to de-fetus herself with a knitting needle. The bath water turns a murky dark color and the camera lingers on the girl who is bleeding to death in front of us. From the opening credits I knew this was going to be a bad one but this scene gave me a sort of false hope that maybe I was in store for something half way decent. Oh how wrong I was...
Jump forward to modern day and we get a bunch of uninteresting characters and a really shitty hip hop soundtrack. As if the music wasn't bad enough the movie had some of the worst lighting I have ever seen and I'm not talking bad 80's slasher film lighting where everything is to dark to see. I'm talking bright red, green, blue and purple lighting. At first I thought the crew were going for a sort of Dario Argento style lighting but it was so over done it becomes strenuous on the eyes. Most of the time I was staring at the strangely lit screen wondering how they were trying to justify the source of the bizarre lights. It wasn't until close to the end of the movie that I realized that the electricity was supposed to be out and the house was supposed to be lit by candles. This just made me more angry. I have never seen a candle cause a room to glow green and purple.
Aside from the shitty lighting, we have these endless scenes of the ghost chasing people around the house with what seems like the same shriek looped into shot after shot. The murder scenes are all pretty dull aside from this one completely unintentionally hilarious death by basketball scene. A girl is hit in the face with a basketball (and no her head doesn't explode. this isn't Deadly Friend.) and she falls to the ground. The murderous ghost then dribbles the ball on her her face. This scene seems to go on for way to long and every time the ball comes crashing down on the victims face we get more and more blood.
Then the captain of the cheer leading team has a trophy shoved down her throat and blood pours down into her busty cleavage. I sense a bit of animosity here, especially because the writer/director is a woman. All the other murders are relatively boring and the movie just seems to go on and on.
Aside from the basketball murder sequence, a death by bong and the bloody bathtub scene there is absolutely nothing entertaining about this movie. Sorority Sister Slaughter is just one big abortion. Skip this one and watch Black Christmas again. 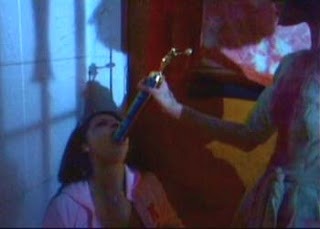