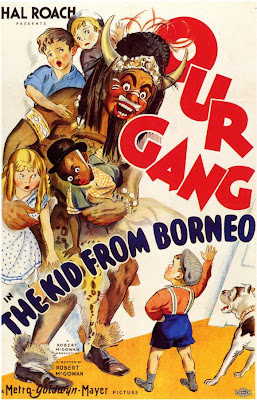 Years later this Our Gang short would be removed from the Little Rascals television syndicate due to racism in the content. In this 18 minute talkie Spanky's uncle, known as the black sheep of the family is in town. Spanky's parents fear that he will show up at the house and its obvious that he isn't welcome when dad states if he shows up here "I'll punch his head". Meanwhile a savage from the local circus sideshow has escaped and finds his way to Spanky's house. 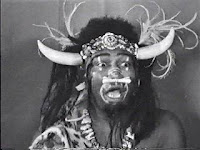 The savage comes complete with horns and feathers on his head with a bone through his nose and he has a big appetite. The gang mistakes the brute for Spanky's uncle and believe him to be a cannibal because he runs around yelling "Yum! Yum! Eat Em Up!". The gang has to fend for themselves and they go to war with the cannibal. There are some funny bits while the savage chases the kids throughout the house with a big kitchen knife. Spanky shoots the brute in the ass over and over again with fireworks while the others brake flower pots over his head. Spanky has the best lines in this one, especially in one bit where he tells the cannibal not to eat him. When he asked why not he replies "I wouldn't taste good, my mom says I'm spoiled". The Kid From Borneo does have its share of what most would consider racist today. Mainly bits of dialogue from Stymie. Still I find it ridiculous how sensitive people are with all their politically correct nonsense. These shorts date back to the silent era and this was just how people talked back then. The Our Gang films were not politically correct on any level. You would never see a child being chased around by a cannibal with a kitchen knife today. Does this mean that child protection groups should deam this piece of nostalgia offensive? Of course not! 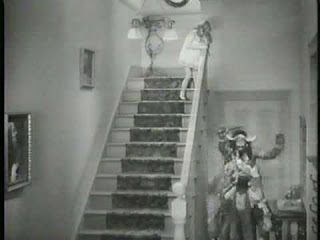