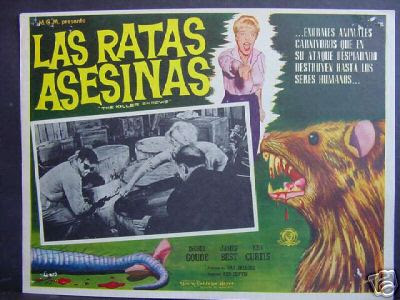 The Killer Shrews is one of those 50's monster movies that just never gets old. The monsters look like dogs with shag carpet draped over them with big rat tails and huge fangs. The truth is The Killer Shrews was so close to being a great movie. As ridiculous as the monsters are the movie manages to build tension and it really pulls the viewer in. I personally feel that George A. Romero was heavily influenced by this movie for his cult classic Night Of The Living Dead. The similarities between the two movies are endless. Its hard for me to believe that Romero didn't get any ideas from this movie.

Most of The Killer Shrews takes place in a house where a group of  seven people board themselves in to defend themselves against the hungry Shrews. They spend a lot of the films runtime nailing the doors and windows shut and enforcing them with furniture around the house. If a person is bitten by a Shrew they die almost instantly. (sounds familiar right?) Even the characters are pretty similar in both movies. For instance every one remembers/hates Mr. Cooper from Night Of The Living Dead. He makes all the wrong decisions and puts every bodies life at risk. Well this movie pretty much has the same character. In one scene he points a gun at our hero's back and threatens to kill him. Our hero turns around and beats the hell out of the guy and doesn't allow him to have a gun. In another scene our hero and our Mr. Cooper character are running to the house from The Killer Shrews. The Cooper character gets to the house first and locks the hero outside to be eaten by the Shrews. All of these things happen between Ben and Mr. Cooper in Night Of The Living Dead and its funny because I have never heard anyone else make reference to these very similar but very different movies. Next time I see Mr. Romero I will have to remember to ask him personally.
Influenced or not The Killer Shrews gets a lot of undeserved flack. Mystery Science Theater made fun of it and there are countless bad reviews on it. Sure its a cheesy movie but aren't all 50's monster movies cheesy? I personally love this film, even the ridiculous ending. If only our hero was black, maybe this movie would have been seen in different light. Okay probably not. 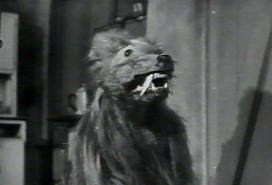