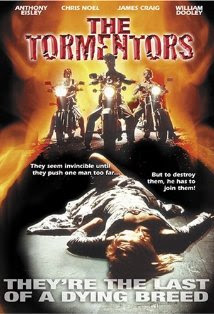 The director that gave us garbage like The Mighty Gorga and Monsters Crash The Pajama Party takes a chance on a Biker Exploitation film. Good thing he chose such a undemanding genre because The Tormentors (as usual) is a total piece of trash.
After a man learns that his girlfriend was raped and killed by a neo nazi, biker gang he chooses to find his way into the gang with one thing on his mind... Kill Kemp, the leader of the gang. If that's not a weak-ass regurgitated plot, I don't know what is. The Tormentors is a mess of a movie and its completely unintentionally hilarious. Lovers of bad movies might enjoy this one to a certain degree but I on the other hand found it to be lame, boring and a weak exploitation flick. 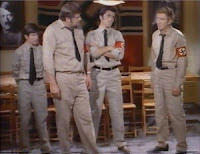 The gang itself goes by the name of the fourth riche and theres only four of these clowns including Kemp the leader, Yet for some reason in one scene they threw in a few extras in the janitor suits with the swastika armbands. Its pretty confusing in the movie and it just makes you wish there really were more gang members. This however is not as confusing as the constant change in accents. Kemp has a thick German accent in some scenes and then in others he speaks like a street kid from New York. Kemp isn't the only one who changes his accent either. We have some other loser who has a thick southern accent one minute and then sounds like a Yankee the next. Then we get this really embarrassing scene involving a bazooka. One of the Nazi bikers points a bazooka at a cop car and pulls the trigger. We hear a bang and then the film cuts to the cop car with a bunch of guys laying down next to the cop car but the car just has its hood open with a bit of steam coming off the engine, signifying that the car was hit with the rocket. What the hell is that? They couldn't even set a small fire on the car to attempt to make the scene believable? They really want me to believe that these guys were thrown from the cop car and there is no damage done to the vehicle? Well I didn't buy it and that scene pissed me off so bad that I couldn't even laugh. We get one inept scene after another and after a while it gets a bit old. The film also includes one soft (very soft) rape scene and a strangulation by Swastika armband. Some pretty girls running around in Nazi uniforms, the slightest bit of nudity, gratuitous hippie dancing, a Jesus who goes to jail and some very tame torture. Don't waste you're time on this one. There are plenty of Swastika clad biker gang films out there and this one just doesn't cut it. Ill take Born Losers over The Tormentors any day. 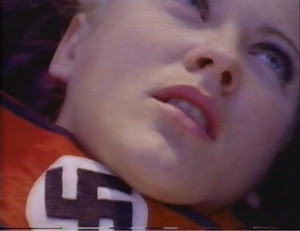