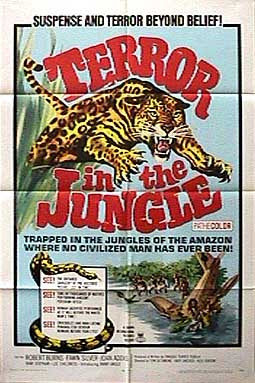 No this isn't a cannibal flick. This is something special. Terror In The Jungle is about a airplane that crashes in the amazon and the only survivor is a little boy. The boy survives the crash but can he survive the Terror In The Jungle, which is full of deadly snakes, tigers, spiders, quicksand and of course headhunters? 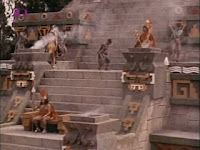 Right from the beginning its obvious that this thing is going to be a lot of fun. The over the top characters are so cheesy and the film is as campy as can be. The passengers of the airplane consists of a 60's rock & roll band with really bad wigs, the sex appeal girl who breaks out go-go dance moves in the aisles of the airplane, a greedy murderess, a couple of nuns, the handsome rich man, the cool pilot and of course the blond boy who will survive it all. The plain crash is pretty amazing and deserves to go down as one of the best crashes in film history. The passengers heads are smashed into the walls in slow motion complete with achy-breaky skulls and red gore. One nun is thrown from the airplane and falls to her death. The other is eaten by crocodiles in an amazing scene complete with some awesome stock footage. The pilot is blown up in an explosion and we just have a whole mess of dead bodies.

Once the boy makes it to land he is captured by a tribe of headhunters who want to sacrifice him to the sun-god but the king sees his golden blond hair and believes him to be a son of god. The natives don't agree with the king and they burn the temple down and get a bit stabby. The king is killed with a knife to the gut complete with slow motion stab wound and red gore. Its a very strange special effect and I don't know if I have ever seen it before or since. The slow motion violence is used more then once and its just as strange every time. Terror In The Jungle also offers up a dead priest who is eaten by piranha, severed heads, a Spanish pilot is killed by a poisonous dart and in one of the best scenes a man is eaten by a tiger.

Terror In The Jungle is not so bad that its good. Its so weird that its great. Okay its pretty bad too and Ed Wood fans are sure to find a place for this in their collection as well. Check this one out for dead priests & nuns and some really weird bloodletting. 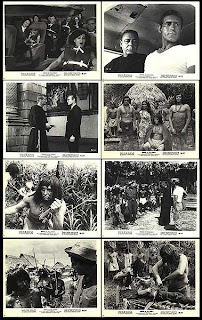 Email ThisBlogThis!Share to TwitterShare to FacebookShare to Pinterest
Labels: Terror In The Jungle