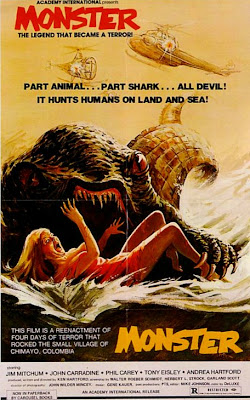 Monstroid also known as It Came From The Lake, Monster : The Legend That Became A Terror, The Toxic Horror and The Toxic Monster... You can call it what you like but I call it a fucking mess.

Monstroid crawled out of the murky watter and was released upon the world in 1980 which is ridiculous because the production started almost ten years earlier in 1971 and its very obvious. To call movies like Dont Answer The Phone and Maniac polished seems crazy but by the standards of Monstroid's film quality it is very reasonable. The sound is muffled, the colors are faded, and the acting is pretty damn bad but its okay because (Yes you guessed it) John Carradine appears in it. Monstroid is yet another title in the seemingly endless list of sludge from bottom of barrel movies in which Mr. Carradine makes an appearance. Carradine has a bit more screen time then the average awful B-movie that he shows up in with a pretty big character as a priest.
The print that I own is really shaky ass well. The opening credits jump up and down on the screen as if the film makers were trying to make us nauseous before we even see anything and it only gets worse as the runtime marches on.

Defending this movie is pretty hard to do because Monstroid is no more then another big let down. It had potential with a huge monster that doesn't look half bad if you're into these goofy types of movies but of course they fuck it all up with scenes that are so dark you really can't tell what the hell you are looking at. In one scene two kids snap pictures of the monster as they escape through the woods. When they show the pictures to the adults all you can see is a eye in one picture, scales in another and maybe a few blurry teeth. The pictures were good enough for the grown ups but the blurry and way to dark scene were not good enough for me. Us monster movie hounds want to see our blood, breasts and beasts and it pains me each time when a movie is dark to enjoy.

Of course the inept film making is all part of the fun and we do get plenty of botched up night for day shots of the monster but it really just hurts this flick in a very bad way. Although the monster is sort of a giant Loch Ness Monster, for some reason I couldn't help but be reminded of the far superior sleazy, sea urchin, monster flick Humanoids From The Deep which also came out in 1980 but is a much more gory and trashy monster flick. 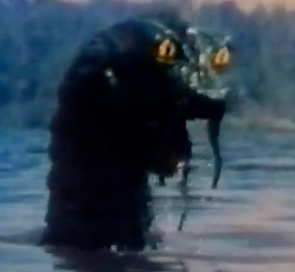