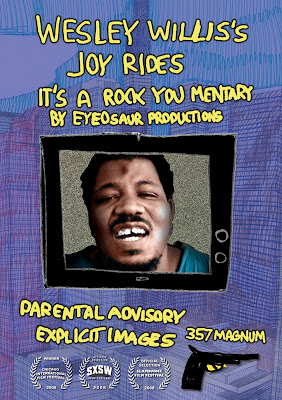 You have cult films and then you have cult musicians. Both cater and appeal to a certain audience and the rest of the world would normally dismiss it as garbage. Why not mix the two with a movie about idiot savant, musician, Wesley Willis?

Personally being a fan of Willis and his repetitive and completely insane form of "Rock & Roll" Joyrides was a nice watch for me. It was slightly more informative then the previous Willis documentary Wesley Willis : The Daddy Of Rock 'N' Roll and just as fun if not more.

This one digs back deep into the tragedy that is Wesley's life. Discussion from family members on his abusive household and the foster homes are all here and it does clear up a lot of questions of where somebody like Wesley comes from. His brothers have their share of screen time and lets just say somebody definitely pissed int the Willis family gene pool. Retardation and mental disease seems to run in the family and Wesley is the lucky one who was able to turn it into art.

The fact that a man who most thought was a homeless bum was in fact walking around with ten or twenty thousand dollars on him is just insane but then again insane is what we came to see. During the runtime of the documentary Wesley has his ups and downs or as he calls them Joy-Rides and Hell-Rides. He speaks of his schizophrenia and his demons. He abuses himself on video for us and its a funny and disturbing at the same time.

There is definitely a sad tone that runs through Joyrides and it plays with the senses. One moment you laugh at Wesley's ridiculous behaviour and the next you feel bad for him.

The dvd offers up plenty of head-butting, lots of silly rock & roll music. Some really funny interviews with family and friends. We follow Wesley through the city streets all the way to his death-bed. Wesley fans won't be disappointed.

Rock over London! Rock on Chicago! and long live the insanity of Wesley Willis! 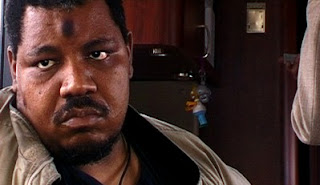