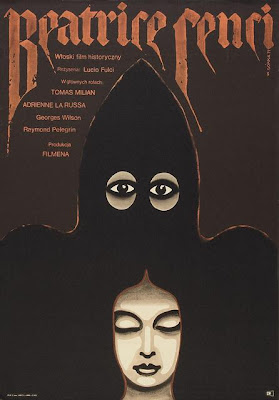 To the average horror buff Lucio Fulci's name usually means one thing... GORE! Unfortunately most of his early films go unnoticed by the true horror community. Beatrice Cenci also known as Conspiracy Of Torture is definitely one of Fulci's great gems that has been forgoten and is never spoken of which is a shame because it is one of his greatest works visually and holds a serious social commentary on the Catholic church.

The setting 1599 Italy. The villain Francesco Cenci... or is it religion? Francesco Cenci is a rich and powerful man with a very sinister side. His daughter who goes by the title name of Beatrice Cenci gets the brunt of his abuse. She is beaten and locked inside a concrete dungeon. Beatrice prays for an escape from the tyranny of her evil father. Her dreams of being sent to a nunnery are shattered when her father tells her she will remain in her cell until he is dead. Plan B... kill daddy. Beatrice and her lover plot out the murder of Francesco Cenci along with the help of her mother, two brothers and a infamous criminal. After the murder is acted out Beatrice and the guilty party learn that the horrors of the church and their brutal form of punishment is far worse then anything they could have imagined.

Lucio Fulci didn't make a lot of friends with release of Beatrice Cenci. Italy being a very religious country viewed the film as an assault on the Catholic church and it was. This caused an outrage that ended with theater goers chanting in the streets "kill the director". Luckily for us gore-hounds these religious psychopaths didn't get they're hands on Fulci and the director didn't live out a nasty execution in the name of god. That really would be life imitating art or the other way around.

Fulci would go on to attack the church more then once through celluloid with movies like Don't Torture A Duckling about killer priests and such but its Beatrice Cenci that really portrays Catholics as scary and horrible people. The black hooded men of god seem no different from the executioners who send severed heads-a-rollin. They are fat, sweaty, greedy and most of all corrupt. Whether or not Fulci knew his film would have such an impact on viewers is questionable but there is no second guessing who the director was pointing his finger at.

Beatrice Cenci almost differs from Fulci's typical misogynist undertones at first with a female lead as the victim but soon falls into familiar Fulci territory with questionable ideals. As the film moves on Beatrice almost seems selfish and to be a manipulator of men and I suppose the film leaves her loyalty to her lover open to sugestion from the viewer.

Beatrice Cenci is a masterpiece from a once brilliant director who would be remembered as The Godfather Of Gore (not to be mistaken with Herschell Gordon Lewis). His talent is here and most wouldn't believe what he was capable of. The film plays in true Quentin Tarantino fashion with a story that is told through flashback and no emphasis between runtime and events similar to movies like Pulp Fiction. It has its share of brutality with a scene that shows a man being mauled by wild dogs. We have a father, daughter incest rape scene, a spike is stuck through a mans eyeball (complete with gore), some bare breasts and decapitation. We also get a fair share of nasty torture from various device's in the same vain as Mark Of The Devil but less exploitive.

Fans of Lucio Fulci need to own this movie and pay respect where it is due. 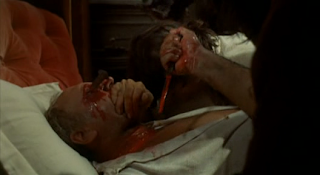