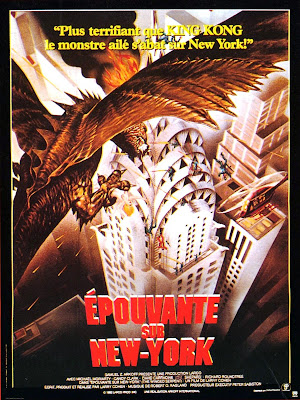 Exploitation director Larry Cohen offers yet another amazing cult film. This time dressed as a classic style giant monster movie like The Giant Claw but still holds that sleazy feel from his 70's flicks like Black Caesar and Its Alive.

Q is chock full of senseless violence and gratuitous nudity. Decapitation and people being skinned alive are on display in gory detail. Despite the excessive blood letting and bare breasted women Larry Cohen has the actors play their roles totally serious which helps make the movie more enjoyable. It's always nice to see a totally ridiculous movie played straight, rather then the Troma Studio's formula of never take yourself serious. This seems to be something that Cohen has always been very good at and it helps his films move along at a nice pace. Movies like Hell Up In Harlem and God Told Me To could easily have been cop-out flicks with annoying comedy bits thrown in but they remain extremely unique due to Cohen's style of direction.

The plot (also written by Cohen) tells of a low-life criminal who botches up a heist and discovers a nest in a New York City skyscraper where a ancient Winged Serpent is hiding. David Carradine plays a cop who places a connection with a brash of nasty serial killings with the giant monster. I'm sorry but you would never guess this one... It turns out that Q is in the ranks of Godzilla in the sense that the giant killer bird is a "God" and the brutal killings were sacrificial offerings to the ancient god. "This thing was prayed back into existence". Not only do we have the privilege of a giant monster eating the people of Manhattan but we get to watch David Carradine go to war with it.

In the 80's there just wasn't to many giant monster movies in America and especially not monsters that would terrorize N.Y.C. While Godzilla had a craving for Japanese food, Q is lucky enough to be in the melting pot and we all know that New York has the best food in the world. In other words this fucker is hungry. Q offers up dead cops, 80's special effects, severed heads, limbs falling from the sky, a man has his heart cut out, another is hit my a taxi and we even get a baby monster as a added bonus. 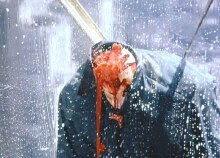