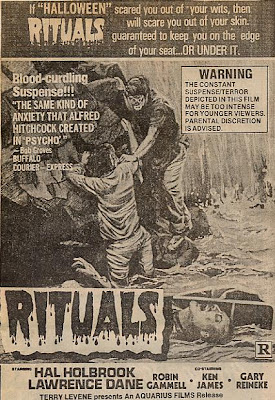 Every once and a while I catch a flick that I love so much that I can't help but wonder how it could have gotten past me, unnoticed for all these years. Then you have the ones that were very rare at one time and seem to be a hype at the moment. Those ones usually tend to let me down a bit but Rituals falls into this category and definitely didn't disappoint. 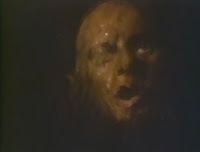 Many movies have jumped on the Deliverance ripoff band wagon but very few are worth a shit. I would say Just Before Dawn is probably one of the best along with this one and although Rituals isn't quite a slasher the two films have a lot in common.

Five doctors take a vacation in the woods in Canadian mountains. They are terrorized by a seemingly invisible visitor. Of course the terror in the woods isn't really invisible, he is just damn good at hiding and doing sneaky shit. The doctors are knocked off one by one until only Hal Holbrook (Creepshow, Girls Nite Out, The Fog) is left. When he meets the killer face to face he is forced to fight for his life.

Of course there is a motive behind the killings and the deformed lunatic behind the killings is pretty deranged looking. Rituals also known as The Creeper offers up a feeling of total abandonment and hopelessness. The vast woods seem endless and a happy ending doesn't seem to be in our future. The mood and tone of the film works perfectly and the tension builds to a point where the viewer really starts to feel for the characters. I suppose the good acting helps out a lot and Hal Holbrook really does an excellent job as a man with who is fighting odds that are not in his favor.

I have to admit as much as I liked this movie the ending was a bit of a let down for me. I felt slightly cheated and almost feel the need to go back and watch it again as if I will feel better after a second serving. Despite the abrupt ending Rituals is a pretty damn good movie. Fans of back-woods, survival flicks like Deliverance will not be disappointed. Check it out for some killer bees, bone breaking brutality, a severed head on a steak, severed head tossing, mutilated feet in bear traps, weird dialogue "He was a boob... Such a gentle boob.", Shotgun violence and deformed hillbillies. 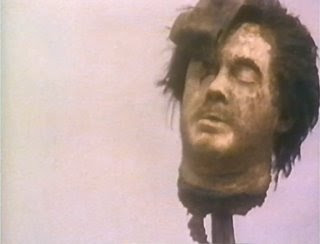