70's Italian film makers didn't waste much time when it came to genre flicks and ripoffs. The international success of America's The Exorcist means only one thing... Euro-Trash versions of green vomit spewing demons. Unfortunately for us The Eerie Midnight Horror Show isn't all that trashy or even good for that matter.

The VHS title obviously trying to cash in on The Rocky Horror Picture Show does catch the eye but some of the earlier titles were way better. Also released as Enter The Devil, The Devil Obsession, The Tormented and the awesomely exploitive title The Sexorcist. Which ever title you choose The Eerie Midnight Horror Show is bound to let you down.

A hand carved wooden statue of a crucified Satan is discovered and of course tampered with. Satan comes back to life, pulls himself from the cross and possesses a young girl named Danila who strikes a odd resemblance to Ashley Laurance from Hellraiser. The demonic Danila acts out against the church, family and friends. She tries to indulge in some incest with daddy which leads to some domestic violence (complete with gratuitous daughter slapping). However Danila's level of perversion pales in comparison to her devious mother who likes to run around with the town bad boy. In one of the best scenes Danila spies in on her mother as she is stripped down, thrown on a bed, covered in rose petals and then whipped with roses. Blood and roses (Sounds like a Mario Bava movie or something) is on display and Danila's mother loves every minute of it of course.

We also get a rape scene between the devil and Danila, a sadomasochist priest who likes to whip himself and if they used regular split pea soup in The Exorcist they definitely used chunky for The Eerie Midnight Horror Show.

Aside from the bare breasts and the awesome rose whipping scene we get a pretty cool crucifixion. It doesn't quite compete with the brutal crucifixion in Lucio Fulci's The Beyond but the red stuff does spill as giant railroad spikes a hammered into our female leads hands and feet.

In the end we get the final showdown between good and evil, priest and demon. I'm sure you guessed it but the conclusion is right out of The Exorcist with one dead priest and a healthy Danila. The only difference is that in this one the priest takes a beating from a big heavy chain.

Out of all of The Exorcist ripoffs out there The Eerie Midnight Horror Show isn't a top pick. Aside from the crucifixion and the whips there really isn't much to offer. Check out Exorcismo or Seytan (Turkish Exorcist) for some more silly possession from over seas with devils and exorcism. 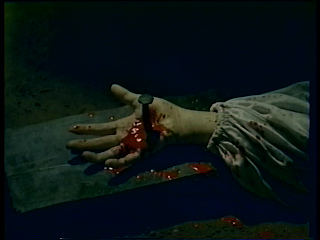