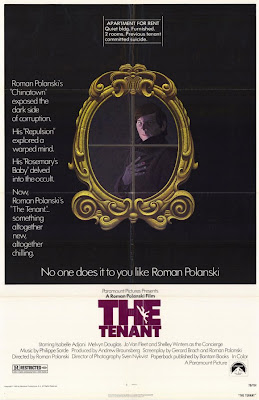 Roman Polanski writes, directs and stars is this unsettling tale of a man who rents a room with a violent history. The last tenant committed suicide by jumping out of her bedroom window and he seems destined for the same fate.

Polanski really struck a nerve with me on this one and two scenes in particular I found to be very disturbing. One being a scene in a hospital. Polanski goes to see the former tenant who jumped from the window and when he gets to her bed at the hospital she is just coming out of a coma. She is completely wrapped with gauze bandage to the point where she looks like Boris Karloff as The Mummy and blood is leaking through the bandages from her head. Only her eye and mouth is left unbandaged and she is clearly in a great deal of pain. She opens up her mouth and we see she is missing teeth and she lets out a blood curdling scream before she dies. This scene was so affective that I actually cringed a bit. The next ultra-disturbing scene shows a man attempt suicide in the same manner. He comes crashing down and is mangled pretty badly from the fall but doesn't quite die. He spews blood all over the place in paranoid, delusion and crawls back to the top of the building to take another leap towards death.

Aside from the disturbing scenes. The Tenant has elements of comedy, suspense and has a very surreal artistic side with awesome camera angles and the perfect use of lenses and lighting to set mood and uneasiness. Many people put The Tenant down and say it doesn't make sense and I admit it can get a bit confusing at times but anyone with half a brain and a general interest in films of the macabre should love this movie. Check it out for some cross dressing, knife wielding, paranoid, suicidal, child-slapping madness. 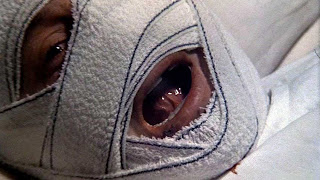 Email ThisBlogThis!Share to TwitterShare to FacebookShare to Pinterest
Labels: Tenant (The)