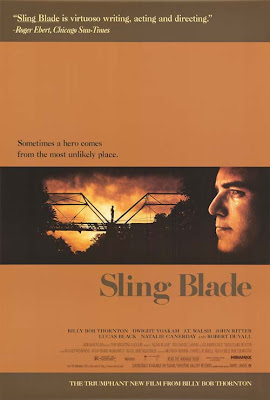 Take Forest Jump and pretend it doesn't completely suck. Then throw in a abusive drunk, a homosexual and some murder and what you have is Sling Blade. Usually I don't go for these sappy type of Hollywood flicks but there is something about this movie that just burns its self into the brain. You find yourself thinking about the character Karl played by Billy Bob Thorton and his voice seems to still rattler around in your head for a long while after a viewing. Then you find yourself quoting the retarded murderer. This can only mean one thing... Sling Blade has to be a good movie. 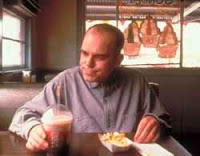 Billy Bob writes, directs and stars in this movie and he does a great job in every department. The funny thing is that Sling Blade has such a monotone vibe throughout and there really isn't much going on aside from a silly grinning retard with a very unique way of thinking, moving and speaking.

Karl has spent the majority of his life in a mental institution for murdering his mother and her lover. His time is up and Karl is released back into the cold world. He wants to stay in the loony bin where it is safe but is forced to leave. He befriends a young boy with some issues of his own. His real father blew his brains out and his mother's new boyfriend is a alcoholic psychopath with a very dangerous side. Karl takes justice into his own hands and kills the abusive boyfriend for the boy and his mothers safety and a chance for happiness.

A friend of mine once referred to Billy Bob's character as a man who kills for justice. I think he was as far off as you could possibly be. All that Sling Blade was trying to portray is a man who once killed out of hate and for self gratification but learns how to sacrifice in the end by killing out of love.
"And Charlie says that in love there is no wrong".