Oh god, the Ninja Death trilogy is insane! Technically it isn't a trilogy, in fact it was just one long absurd movie but as far as I know it was never released in its entirety in America and for once I think I am grateful because if Volume 1-3 were all together fully intact the film would be about five hours long and that is enough to drive anyone nutty. Even the most jaded of cult fanatics like yours truly.
Ninja Death (Volume 1) is really the best of the lot and it follows a young snot-nosed Kung Fu-ster named Tiger who hangs around in brothels and kicks the ass of pimps, drunks and of course any Ninja who tries to step to him but its been a long while since I watched the first segment of Ninja Death and right now we are talking about Ninja Death 2. 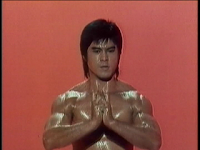 Volume 2 opens up showing a oily chested Tiger in front of a red drop, practicing his Kung Fu. Next a sexy lookin babe drops in and throws some Ninja stars and then we see a dude with a silver Satan mask. Pretty cool huh?

Now Ninja Death attempts to follow somewhat of a story and we find out that young Tiger had some important parents and his blood is tainted and he must take revenge on some black pajama wearin Ninja folk who wronged his ancestors or something like that. Oh we also find out that Tiger has a ancient form of Ninja-Fu in his background called Plum-Fu or some shit. Well to make a long story short Tiger meets up with his blind uncle who bears the Plum symbol on his body and he taught Tiger how to kick ass Plum style... and he does. He also takes a young girls virginity, oils his chest a few more times and fights some really weird dude in a yellow jumpsuit with crazy eyebrows and a Charlie Manson type beard. Then the cat with the Satan mask comes back and decapitates a rapist Ninja and rips the guts out of another. The Satan mask dude performs a massacre on a whole slew of Ninja folk and we also get some weird exploding weapons in a fight scene and then the guy in the yellow jump suit blows on a flute and makes the devil mask guy disappear.

Yeah I know it doesn't make any sense and I don't care because that's the whole beauty of these crazy martial arts movies and as I said the first instalment is the best and its not because the plot is clearer (even though I believe it is) but its because there is so much sex and violence in that part. I recommend watching them in the proper order but not in one sitting. That would just be crazy! I feel crazy right now and I only watched volume 2. Oh but I did learn some things. I learned that Chinese men don't like to bath with women. I also learned that oil on the chest will improve your martial arts. Oh yeah and one more thing... If you rape a young virgin its okay, just as long as you marry her afterwards. 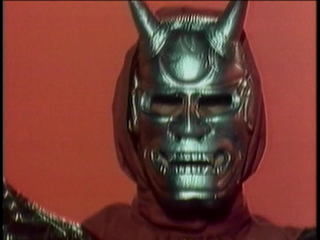