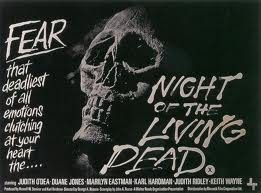 Here it is... The movie to blame for my life long obsession with horror films. I first saw Night Of The Living Dead as a young child with my father which is strange because my father isn't much of a horror fan. Still I'm not sure if it was a odd moment of bonding or what but at five years old I remember just loving every minute of the ride. I remember not being to scared which is also odd for a young kid seeing his first flesh eating zombie flick but instead I remember thinking, Wow this is awesome! 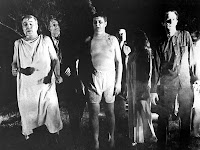 Well twenty some odd years later I still think its awesome and I feel lucky that my first zombie experience was with the king of all zombie movies. Still to this day it is by far my favorite zombie flick of all time and even one of my favorite horror movies of all time. Personally I am not the biggest fan of zombie films and I feel that the genre is entirely to big. Any schlep with a camera and a group of nerdy friends feel they have the right to stagger down the zombie path and cop out from making an original film that might require some talent or skill. Don't get me wrong I like my share of Zombie films especially the Italian ones like Zombi, Dr. Butcher M.D. and Burial Ground but the facts are the facts and there are way more bad zombie films then good ones.

Night Of The Living Dead is number one and always will be. We get gut wrenching zombies, rotten corpses, gratuitous bitch slapping, crowbars to the head, bug eating, mommy stabbing, daddy eating, teenagers crash and burn leaving a tasty BBQ treat for the flesh-eaters, and the hero is black. Night Of The Living Dead was ahead of its time and horror movies today still have a hard time living up to it. 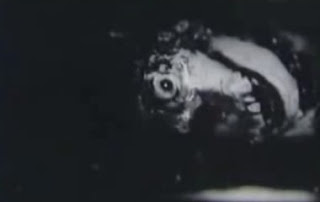 Email ThisBlogThis!Share to TwitterShare to FacebookShare to Pinterest
Labels: Night Of The Living Dead, Zombie Flicks