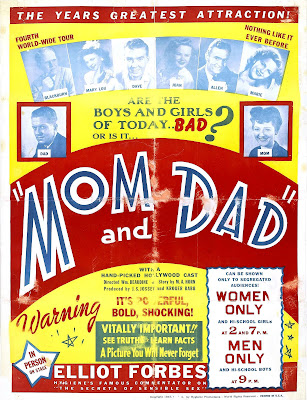 Exploiteer Kroger Babb dreamed this one up and created the ultimate in sex hygiene sexploits. Mom And Dad was his baby and he promoted it like a circus attraction. His crew would travel from town to town and plaster the movie posters on anything they could find.

The posters themselves were guaranteed to attract any youngster who walked passed, with separate screenings for boys and girls. Some posters insisted that parents take their children to see the film but of course most parents were shocked and appalled that such pictures were coming to their neighborhood. The church tried to ban the film from playing and all across the country god fearing assholes protested its very existence. Naturally this only adds to the hype and controversy around a film and in the world of exploitation, what more could a film maker ask for? In many towns, once the movie screened it would be interrupted at a certain point and sex hygiene books would be passed out to the audience... That is for a price of course. 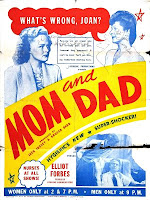 Word gets around in a small town and Mom And Dad especially appealed to the youth with the rumors of full frontal male and female nudity. I suppose in 1947 this kind of thing was on every teenagers mind but very few have seen the opposite sex in the nude. Well Mom And Dad offered this... At a price that is. If the kids wanted to play they had to pay in more then one way. First they were forced to sit through the sappy story of June, a teenage girl who got in a bit of "trouble" you see naive June fell for a older boy with some smooth-talkin and nice eyes. Well its not long before June is in the back seat of lover-boys car and she finds herself knocked up... Or in "trouble". Throughout the whole film, the word pregnant is not used once. It is substituted with the word trouble and it really makes no sense because in the later portion of the film we do get the full male/female nudity but we also get a explicit child birth with gore pouring all over the place. We also get a very disturbing cesarean section, surgery scene and I have to admit I cringe every time I see it. Last but not least we have the venereal disease footage and this segment is pretty disturbing as well. We see cripples, holes in the roof of the mouth, holes in the eyes, rotten feet, visible bones protruding through flesh, V.D. infected genitals (male & female), and we even get silly 40's diagrams showing the spread of Syphilis.

Many consider Mom And Dad the most successful exploitation film of all time and it is a must see for anyone interested in the alternative to Hollywood films. Don't listen to those "self styled moralists" and church goers... and don't miss Mom And Dad when it comes to your town. 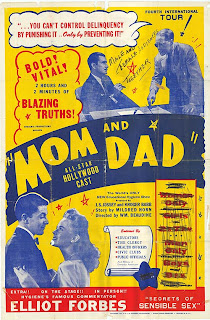