Anthony Perkins plays Dr. Jekyll & Mr. Hyde & Jack The Ripper. That's right, Edge Of Sanity mixes the two tales and it comes out as weird as it sounds. The film opens up with a young boy spying on his mother and father having a roll in the hay. The child is supposed to be a young Henry (Perkins) Jekyll. When the fornicating couple catch young Henry spying in on them, they string him up and give him a good beating. This of course leaves Perkins yet again with some serious mommy issues. 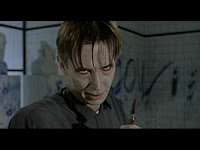 Jump forward in time and Dr. Jekyll is a well to do upright citizen. However he has been experimenting with drugs on his own time and he comes up with a concoction that transforms the doctor into a pale faced, violent, sex addict named Hyde... or Jack The Ripper.

Perkins roams the streets at night in true Ripper fashion, slicing and dicing young prostitutes who remind him of his mother.


Edge Of Sanity also offers up some nice cinematography and Dario Argento style lighting. The main problem is that it's supposed to be a period piece set in the 1800's but the cast are dressed more like new wave hookers. I don't know who's brilliant idea this was but it really takes away from the film. One of the male characters even wears black eye makeup and the hookers look like Madona in the Like A Virgin era. Edge Of Sanity is worth a watch for anyone who wants to see Perkins in a (almost) Eurotrash role but take fair warning it turns out to be a bit of a mess. 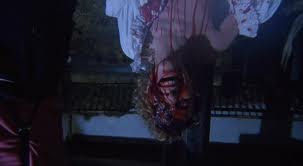