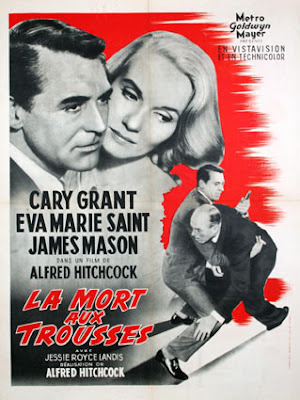 Hitchcock's North By Northwest stars Cary Grant a man who is through running for his life. There is a price on his head from some rough characters who think he is a secret FBI agent. He teams up with a pretty blond and together they fight against the dangerous men who want him dead. Things get really crazy when Grant learns that his pretty blond girlfriend isn't who she says she is.

Is she with the enemy? Is she with the FBI? Or is she just a loose broad who has a bad choice in men? North By Northwest is full of twists and turns and keeps the audience tense and guessing through the majority of the film. The perfectly framed images helps add tension and anxiety to the film and the story by Ernest Leham (West Side Story) is relentless.

The most memorable scene shows Grant running from a plane in the desert while the pilot opens fire on him with a machine gun. We also get the lovey-dovey stuff which keeps the action from being repetitive. We get fist fights, stabbings, gun-violence, and a awesome final sequence on Mount Rushmore which leads to a few characters falling to their death from Washington's big head and my personal favorite scene shows Cary Grant being force fed a bottle of Bourbon. Next he is driving drunk on the run from his killers as he swerves around sharp turns at the edge of a cliff.

We also have some humor thrown in for some extra fun and we really get to see some of Hitchcock's warped humor in random oddball scenes that I'm sure were not in the original story. There is also some strong sexual reference thrown in which is a little risky for a film in 1959. One scene shows Grant strip off his suit and he says to the girl "What can a man do with no clothes on in twenty minutes".

Personally I like many of Hitchcock's titles more then this one. Films like Psycho, Rope, Vertigo, Frenzy and The Birds but North By Northwest is still another example of the mans genius. Its the perfect movie to watch with a date. Not the best of picks to entertain friends with but if the crowd is right North By Northwest will set the proper mood. 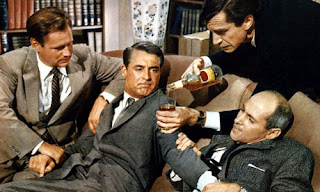 Email ThisBlogThis!Share to TwitterShare to FacebookShare to Pinterest
Labels: North By Northwest