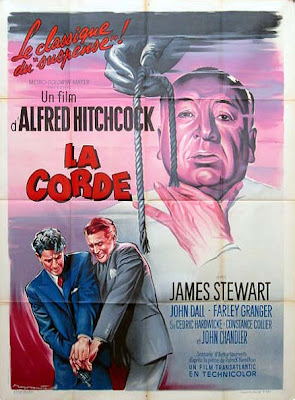 Alfred Hitchcock takes on the film that was based on a real life murder with style and talent. Rope was shot in 10 takes and the cuts are hidden as the camera passes by dark objects in the room and yes the movie pretty much all takes place in one room. Rope is a full length feature but it is supposed to take place in real time hence the lack of cutting. 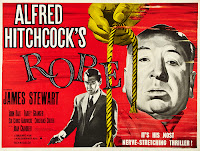 With a very limited cast and a film that takes place almost entirely in one room Hitchcock manages to complete a true masterpiece.

Two rich yuppies murder their friend and classmate by strangulation with a old rope. They then stick the body in a chest and throw a yuppi-fied party with the friends and family of the deceased. The two boys waste no time sharing their views on murder which are almost plagiarized from the superior mind of their teacher (James Stewart). "After all, murder is - or should be - an art. Not one of the 'seven lively', perhaps, but an art nevertheless. And, as such, the privilege of committing it should be reserved for those few who are really superior individuals." The three go on long philosophical rants about murder and those who have the natural born "right" to take "inferior" lives but the two murderers start to loose their cool as the minutes run past.

Rope is one of Hitchcocks best and interesting. It certainly is unique. The combination of  the plot and originality make Rope a must see for everyone and anyone. That is with the exception of the "inferiors" who shall be properly disposed of.

Email ThisBlogThis!Share to TwitterShare to FacebookShare to Pinterest
Labels: Rope