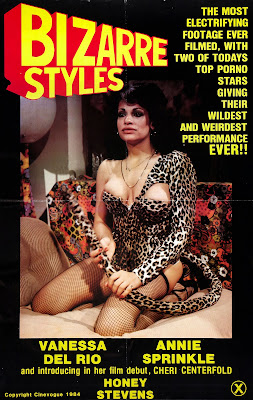 Here's another filthy one from the director who gave us Punk Rock and Teenage Twins. Although this one really lacks in the story department, with a almost nonexistent plot about a group of girls who run a fashion show. Bizarre Styles makes up for it with sheer filth and cinematic smut.

Other then these three important ultra trashy scenes we get a hot tub sex scene with Vanessa Del Rio and some hairy dude. We also get a lesbian threesome with Rio, Sprinkle and some other junkie looking chick. I also learned that girls like men with hairy chests and long nipples from an intelligent conversation between Rio and Sprinkle. Oh and did you know that girls where lipstick on their nipples? Well its a fact. I seen it in Bizarre Styles. They also wear it on their clit. It comes in different flavors but Annie Sprinkles prefers "Cunt Sucking Cranberry". She has room for fists, lipsticks, dicks, tongues and more.
Posted by Paul Awful at 7:30 PM