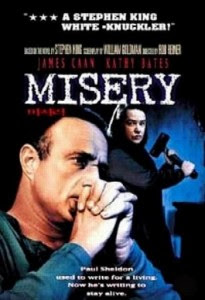 "Eat it till you choke on it, you sick twisted fuck!" is what Paul Sheldon tells Annie Wilkes as he shoves burning pages of his book into her mouth in the big climax. This really is a light revenge after what she has put him through. 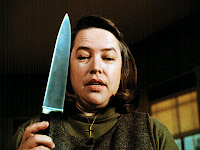 Kathy Bates plays Annie Wilkes, one of my favorite female psychopaths of all time. She saves Paul Sheldon (James Caan) from freezing to death in a car wreck and brings his shattered body back to her house in the middle of nowhere. "I am your number one fan" is the first words we hear come from her mouth as Paul Sheldon comes to consciousness. Paul Sheldon's character is supposed to be a famous writer, who shits out sappy love stories for morons like Annie Wilkes. Its not long before Paul finds out how much of a fan Mrs. Wilkes really is. This is one nutty bitch and her dangerous side slowly starts revealing more and more as Paul lay in bed with horribly broken legs.

As the tagline states, Paul Sheldon used to write for a living. Now he's writing to stay alive. Wilkes thinks god is speaking to her and he wants her to guide Sheldon through his greatest novel ever. She makes it clear that when the novel is finished the two of them will die together. I personally would be looking forward to death after the tortures that were dealt out to this man. Not only does he survive a horrible car accident but he has his legs broken again with a sledge hammer, in one of the most disturbing and memorable scenes. The film also offers up some very memorable quotes "You dirty bird". We also get a shot gun blast through the back, gratuitous head smashing, a gun shot to the arm and a big pig named Misery.

Misery is a childhood favorite of mine and it never loses its charm. Some would call it more of a thriller then a horror movie but I thought it was scary as hell as a kid and it still gets my heart pounding today. Misery is a must own for anyone who loves horror movies. 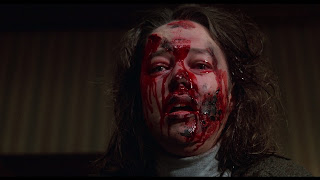 Email ThisBlogThis!Share to TwitterShare to FacebookShare to Pinterest
Labels: Misery