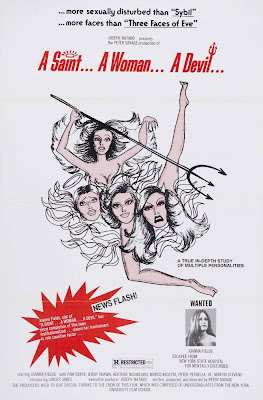 Sylvia also known as A Saint, A Woman, A Devil is another strange one from the 70's. Sylvia is played by Joanna Bell and she has never done anything before or since. She portrays Sylvia as a odd-ball, anti-social, religious fanatic with multiple nymphomaniac personalities. At first glance Joanna Bells acting seems to be incredibly awkward with weird facial expressions that don't seem to match the scene or surrounding actions or moods.

For example if Sylvia is checking out a mans package she tightens her lips and her eyes twitch with a crooked grin. I'm not sure if the facial expressions were part of Peter Savage's direction but it certainly makes Sylvia even weirder.

Sylvia is a little bit all over the place with a very shaky plot and at one point it almost takes a Exorcist ripoff turn and my personal favorite scene shows Sylvia attack a priest with a giant crucifix. She goes on long anti religious rantings and forces the priest or as she calls him "Slave boy" to take off his clothes and she proceeds to rape the man of god all the while ranting about how she is the devil and she commands his will.

The version of the film I saw was extremely cut. Apparently the original uncut version goes at 90 minutes and the VCX print that I picked up is cut down to 73. Its almost hard to believe considering the version I saw had some rough material in it. Makes me wonder what I'm missing. I suppose the problems with the plot is probably due to the rapist in the cutting room, chopping the hell out of this movie. Still Sylvia is a good blasphemous time with hardcore sex, rape, incest and some very strange actors. 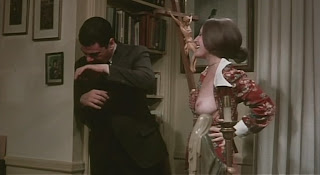