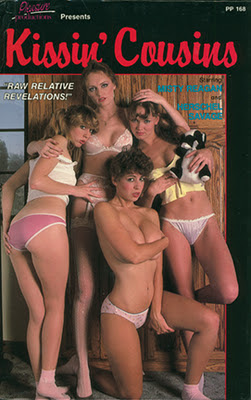 Shot on video with the most minimal of story lines, Kissin Cousins offers up Scott Irish who looks stupid in every movie but at least he can get it up. That is more then we can say for the other dip-shit with the mustache in this movie. Its pretty sad but its obvious that they had to edit around this limp-dick scum bag. They choose abnormal angles with the hope that we wouldn't realize he can't get it up. Characters appear and disappear from the scene and it makes for some of the worst continuity in pornographic history.

Watch for Canyons cannons and that's it!
Posted by Paul Awful at 12:27 AM