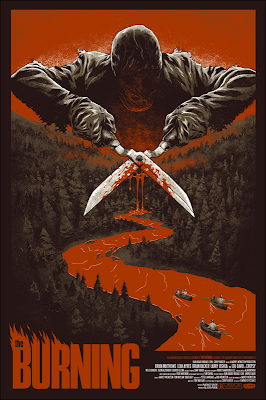 1980 is my favorite year for slasher films. So many great ones would terrorize theater goers. Movies like Maniac, The Prowler and Don't Answer The Phone are amongst my favorites from this year and movies like The Burning are here to show that the stalk and slash movies are going to stick around for a while and the simple formula in movie massacre will continue to bring people into the theater seats. The Burning is a pretty gory movie and while it may start a bit on the slow side it really takes off once we get to the infamous raft scene where our killer takes out four teenagers at once.

The killers name is Cropsy. His victims are the teenagers at a summer camp that he used to work at. His reason for killing is a form of vengeance. Cropsy's face and body is horribly disfigured to from a prank gone wrong, in which he suffered severe burns. His weapon of choice is a giant pair of garden sheers. Why use regular old scissors when you can use a huge fucking pair of scissors?

This movie is mostly remembered for the raft scene that I mentioned before. In what is probably less then a minute of runtime we have three fingers being chopped off in gory detail, A fatal throat wound, Face slashing and brutal stabbings.

The great Tom Savini did the special effects for this one and we all know the man was at the top of his game when this one came around. We also have some nasty flame thrower-fu that would give the average Don't Go In The House fan-boy a hard-on.

We do get some bare breasts and bush on display and not to mention a very young George Costanza from the Seinfeld television series in his first screen appearance. Unfortunately we don't get to see George get killed and chopped to bits. Maybe when Hollywood decides to remake this one they can kill that old prick off. 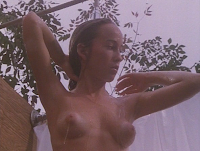 Some of the other fun that The Burning has to offer is dead hookers, maggot infested severed heads, axe to the achy-breaky skull, perverted nerds, typical 80's tough-guy bully's, and lots of gory puncture wounds.

Fans of this movie should also check out the Italian slasher Haunts. That one offers up a black gloved killer using scissors as a weapon of choice. While they might not cause quite as much damage as garden sheers its still worth a watch. "Trust me baby. You're gonna love it". 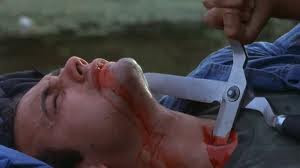