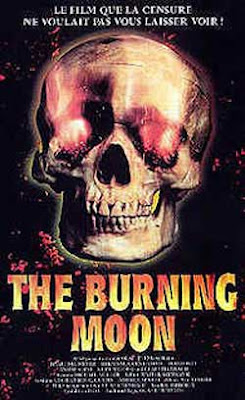 I have heard people compare this movie to Nekromantik which is a bit ridiculous to me. The production value doesn't compete with Nekromantik or any of Jorge Buttgereit films for that matter. For me it plays more like an Andreas Shnaas flick. Sure Burning Moon is better then Violent Shit or any of the sequels but it has that same low budget shot on video feel to it. 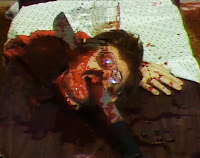 On the upper hand The Burning Moon is a complete and total splatter-house gore-fest. The gore surpasses Violent Shit by the gallons and for this reason alone The Burning Moon is a must see for all gore-hounds and special effects geeks alike. The blood comes by the buckets with multiple decapitations and severed heads galore. The best and most gory scene shows a man being tortured in hell. Visually if you want a great portrayal of hell you should go with Coffin Joe and At Midnights I'll Take Your Soul or Awakening Of The Beast but if blood and guts is what you are looking for you better check out The Burning Moon. A man in brutally mutilated. He has his teeth drilled out with a power tool in true Driller Killer fashion. Next he is cut up with a big knife and eventually spilt in half in a scene that is oddly reminiscent of Lucio Fulci's Demonia which came out seven years prior.

The Burning Moon is actually an anthology film. It tells of a junkie in a street gang who enjoys shooting smack and looking up at The Burning Moon. He also likes to tuck his baby sister in to bed and tell her gruesome bedtime stories. The first story is about a serial killer on a blind date. This one comes complete with a few decapitations. One of which shows the killer throwing the severed head of a prostitute out of his car window into a passing motorists windshield. This pisses the victim off and he goes gun crazy and shoots a man in the head (complete with head explosion). How a little hand gun causes a overly gory head explosion... I'm not sure but it sure is fucking fun to watch. This story also offers up a burning corpse in a bathtub. A machete through a mans face. Fingers are lobbed off, arms are chopped off etc.

The next story tells of a perverted priest in the oh so familiar story of a man doing the work of god and cleansing the world of its filth. This one offers up a nasty rape scene, more gun violence and the infamous hell scene which for me makes the whole movie worth while. Some of the other treats that The Burning Moon as to offer is an awesome scene where grandpa kills a young boys mother right before his eyes, silly Violent Shit style dialogue, and eyeball's being ripped out and shoved into a victims mouth. The eye in the mouth is shot through a weird point of view. Maybe this scene was shot in tonsil-vision.

All in all I'm not a big fan of 99% of all shot on video movies. I think they are shit and always look like some little kid shot it in their bathroom but The Burning Moon stands out amongst the stacks of crap for its over the top bloodletting. Check it out if you're a sicko like me who can enjoy the simple pleasures of red stuff. 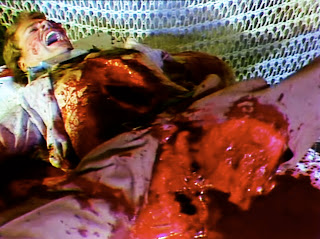