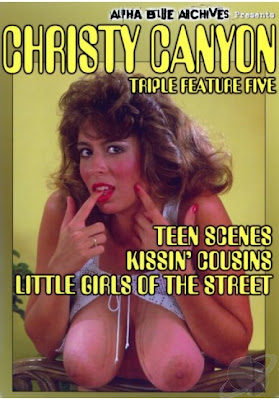 I recently picked this Christy Canyon Tripple Feature # 5 and felt pretty gyped when I learned that Teen Scenes wasn't in fact a feature at all. You should not be able to market a dvd pack as a tripple bill when one of the supposed movies is not a feature but instead is a shitty compilation.

They took all of the Christy Canyon footage from banned Traci Lords flicks and spliced it all together and called it Teen Scenes. Now I suppose this is a treat for Canyon fans who are upright citizens and stay clear of the Lords kiddie stuff but for me it is out right blasphemy to package it as a movie.

This Canyon set sucks the big one. Kissin Cousins is the better of the two shot on video movies on here but that still isn't saying much. Little Girls Of The Streets is total shit and well you already know my feelings on Teen Scenes. Skip this dvd and pick up a nice Vanessa Del Rio tripple feature from Alpha Blue Archives instead.
Posted by Paul Awful at 10:30 PM