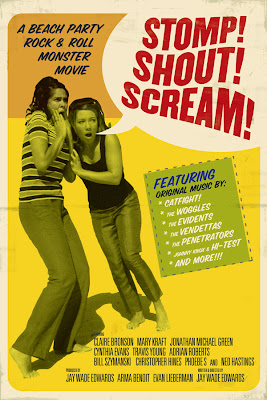 Okay this thing would be retitled for its dvd release in 2009 and go by the name Monster Beach Party A Go-Go. The dvd title should scream out to genre fans. Obviously a mix between the 60's beach party flicks and monster movies. A homage to movies like The Horror Of Party Beach but while The Horror Of Party Beach is an all around awesome movie with monsters, gruesome death and surf rock. Stomp! Shout! Scream! is pretty much a giant turd. 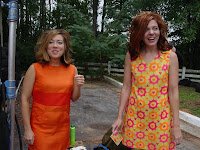 This one tells of a all girl garage-rock group who cross paths with "The Skunk Ape" also known as Bigfoot or Sasquatch. However I couldn't help but be reminded of the awful Curse OF Bigfoot because this thing doesn't look like a monster at all. It is just another guy in a gorilla suit movie (Ape) that were so popular in the 30's and 40's.

I would say the only redeeming value that Stomp! Shout! Scream! has to offer is the wardrobe and a few cool garage rock bands like The Woggles. Everything else is pretty bad, boring and unwatchable. We don't get to see any on screen murder which always knocks points off of any monster movie. We don't get any nudity which is also a shame. 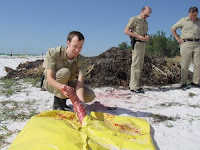 We do get some scattered body parts and severed limbs with a slight touch of the red stuff. We also have our fair share of bikini clad bimbos doing their best Go-Go dance routines on the beach. We have a couple of lines that may get a chuckle out of one or two of you and a pretty funny song about syphilis. Other then that Stomp! Shout! Scream is a complete waste of time.

For a much better homage flick check out the blaxploitation throwback Black Dynamite. That one is great from beginning to end. It stays true to the genre and never lets you down. Stay away from this Skunk-Ape... It stinks! 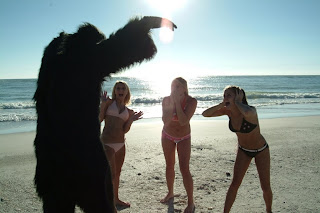