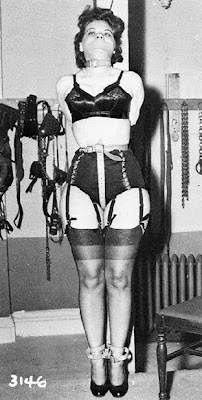 One of Irving Klaw's early bondage stag films. This one shows three babes in a bit of a bind. It involves a submissive brunette being bound and dominated by what looks like a red-head and her blond bondage maid. Fist she is tied around the wrists and ankles and spanked. Then she is hog tied and bound into a sort of pulley system.

Apparently Enslaved Brunette offers some of the best rope work in any Irving Klaw film. Personally not being into bondage I really couldn't judge. Being into cinema on the other hand I can tell you that Enslave Brunette is a nice little oddity in the tasteless archives of stag films. If 50's babes in big undergarments is your thing be sure to give this one a go!
Posted by Paul Awful at 10:55 PM