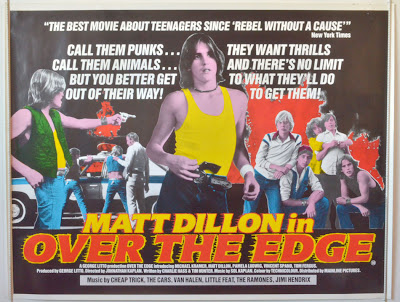 This was the sort of thing I day dreamed about when I was a young kid in school. The kids banning together and revolting against parents, teachers and any other authority figure. Destroying the school and maybe blowing it up... Fuck it!

Well needless to say it never happened in my town but luckily for me movies like Over The Edge gives me the vandalism to school property that I crave oh so much. Being a fan of the 50's juvenile delinquent films and the 80's punxploitation films like Class Of 1984 and Class Of Nuke Em High and any other movie that portrays a youth gone wild.

Over The Edge is kind of like a cross between The Rivers Edge and Rock N' Roll High School which came out the same year. The music of The Ramones can be heard on the soundtrack but this movie doesn't attempt to be funny at all.

Matt Dillon shows up in his first screen appearance ever and he looks like a baby. Lucky for us he doesn't act like one and neither do any of these kids. They drink, smoke weed, drop acid, pack knives & guns and the streets are more then their stomping grounds. They are their battlefield. "Any kid who tells on another kid... is a dead kid". The director would go on to do Truck Turner which is also pretty awesome. We also have a cop that looks a lot like Tom Towels from Henry : Portrait Of A Serial Killer but I am yet to have this confirmed.

Most of the kids in this movie seem doomed from the start. A dead-end town with nothing to do but burn-out. Matt Dillon's character seems to be the most nihilistic and have a certain death-wish. He is eventually shot and killed by the police and the kids revolt by locking the teachers, parents and local police inside the school. The blow up the adults cars and destroy everything in sight. There is this perfect scene of symbolism that shows a young mute kid skateboarding through dark school hallways with sunglasses on and an open knife in his hand. This image struck me the hardest and is probably over looked by most but what better way to portray a generation of nihilistic youth?

Over The Edge also offers up street fights, a dead cop and an awesome bad trip in the classroom. This is must see for anyone who loves juvenile delinquent films! 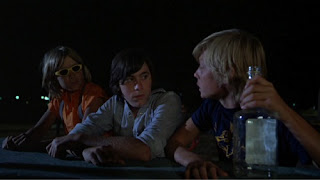 Email ThisBlogThis!Share to TwitterShare to FacebookShare to Pinterest
Labels: Juvenile Delinquents, Over The Edge