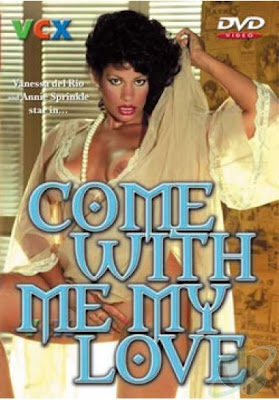 Come With Me My Love also known as Come With Me My Ghost a.k.a The Haunted Pussy and Stay With Me My Love was directed by Sexploitation pioneer Doris Wishman. Despite her lies about never doing a pornographic film, here it is. The director is credited as Luigi Manicottale but it is no other then Mrs. Doris (Nude On The Moon) Wishman. The awful dubbing and odd choice of music kind of proves that its a Doris Wishman flick. Still it proves to be another oddity title from the queen of exploitation. Its a horror/ghost/porno flick and it casts Vanessa Del Rio, Annie Sprinkles, and Robert Kerman from Cannibal Holocaust and Debbie Does Dallas. Come With Me My Love offers up a heavy breathing ghost, a crazy kid who hides behind trees and throws snowballs at porn stars and a body count of 7. Three deaths by gun shot, A man is electrocuted in the bathtub with the old toaster oven trick. Annie Sprinkles catches a knife between her giant jugs, A man is pushed out of a city building window and we get a drug over dose.

A interesting watch for Wishman fans and anyone who is into the most bizarre of classic adult cinema. Everyone else should probably skip it. This thing is available through VCX Video, Something Weird Video and was also released on a double bill with Satan Was A Lady (1975).
Posted by Paul Awful at 2:17 PM