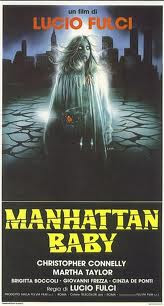 Manhattan Baby is one of Lucio Fulci's worst films and its almost impossible to believe this thing came out the same year as New York Ripper which is (In my opinion) one of his best films. Where New York Ripper is a fast paced, mean spirited, ultra violent Giallo. Manhattan Baby is a slow moving super natural flick. It truly is a sleeper.
In the beginning of the film we see two men exploring a tomb in Egypt. We are treated to a eye wound when one of the men fall through a secret trap door and is impaled on spikes. Being that this is a Lucio Fulci film naturally a spike goes through the mans eye.
Don't let this bit of violence fool you. From here on its a slow talky drama with much to much child acting in it.

Giovanni Frezza, who most would remember better as Bob from House By The Cemetery plays the son of the survivor from the Egyptian tomb eye-wound scene. In this one his name is Tommy and although not quite as annoying as Bob, its still irritating to look at his face through the run time. Tommy and his sister (some how) get a hold of a medallion from the ancient tomb. The medallion holds some sort of evil power and the kids become possessed.

Then we have a bunch of unsuccessful old school scare gags, like creaky doors shutting on their own, lightning storms, sand appears in the house along with a scorpion. The kids baby sitter disappears along with a friend of the family. Fulci even brings back the white eye gag from the far Superior gore flick The Beyond.

Aside from the spike through the eye scene the only other gore we get comes towards the end of the film and most normal humans will be nodding out by then. We get this awesome scene which Dario Argento might have lifted from for Opera (1987). It involves a man being horribly mutilated by birds. The birds rip huge chunks of flesh from the mans face and eventually he bleeds to death. Its a shame such a cool scene was wasted on such a awful movie.