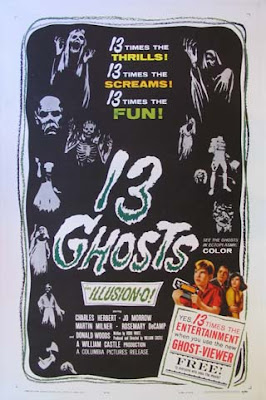 William Castle is famous for his gimmicks and his fun, silly brand of horror films. Sure their cheesy but their still fun. This one is about a family who inherit a house haunted by (yes, you guessed it) 13 Ghosts.

The ghosts can only be seen through the special "Ghost Viewer Glasses" Which were of course also handed out in theaters during the "Illusion-O" screenings. Some of the ghosts look pretty cool. We have a zombie-looking corpse running around. Then thers a decapitated ghost and we even have lion roaming around the house.
Aside from the 13 Ghost's, the house also has a large sum of money hidden somewhere within it. A handsome, manipulative, murderer wants to get his hands on the money before the ghosts get to him.

Cheesy or not, I'll take the original 1960 version any day over that Hollywood remake that came out in the 2000's. William Castles films live on forever in the hearts of countless fans while the unimaginative waste of time remake is virtually forgotten in 10 years.