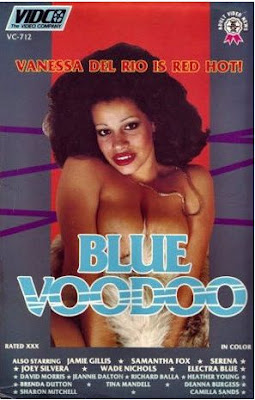 What a let down this one was. Vanessa Del Rio is one of my favorites in classic smut, with her ultra trashy filmography of fetish and filth but even the Latina anal queen from the golden age of blue cinema couldn't save this one.
Blue Voodoo is about some toolbox named Jason who uses women for their money and leaves them broken hearted. Vanessa Del Rio plays a Voodoo Priestess who for some reason chooses to take revenge against Jason. She summons a woman named the Black Widow to act out the deed of vengeance but for some reason before killing Jason she aids other losers act out their fantasies.
All I want to know is who the hell wrote this thing. This is the worst plot I have ever heard of and the movie is just as bad as the writing. One of the biggest surprises is that Blue Voodoo was directed by one of my favorite porn directors. It was Armand Weston's (Defiance Of Good, Taking Of Christina) last film and its almost impossible to believe that this shot on video mess came from the same man.
In the big revenge scene Samantha Fox is masturbating on top of a bathroom sink, splashing water where the sun don't shine. Jason treats her to a good pounding and then the movie cuts away to our Black Widow dancing at some shitty strip club and slashing her own naked flesh with a big kitchen knife. For some reason every time she cuts in with the knife the same wounds appear on Jason. Samantha Fox seems to enjoy the blood on her lover and rides him harder. Jason doesn't have a normal pop shot. Instead there is a bit of red stuff flying around. This scene might sound good on paper but it came off as a mess on video. Oh and speaking of video, we are forced to watch all these really cheesy video fades and dissolves right in the middle of sex scenes and it gets pretty damn annoying.
Robert Kerman, Sharon Mitchell, Joey Silvera and Jaimie Gillis also show up in Blue Voodoo and the only entertaining moment in the whole movie involves Gillis screwing a girl in a crib, wearing a baby diaper and spraying milk from her bottle all over her face and breasts. Its great watching Gillis trying not to laugh during this scene. I however am still not laughing at this 80's piece of garbage. 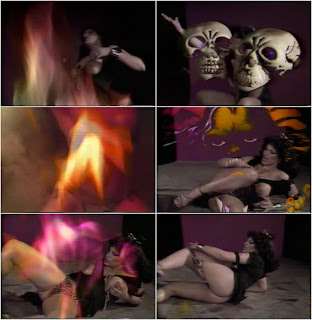