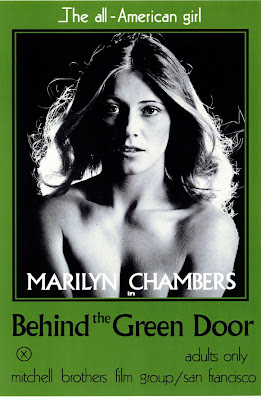 The film that the Mitchell Brothers would never be able to live up to. Its called Behind The Green Door and it truely is a classic in every sense of the word. I can only imagine what was going on in peoples heads as they left the theaters in 1972 or at least those of them who were not spanking off.

The movie makes sure to explain that Gloria will not be harmed and will end up remembering nothing more then feeling completely satisfied.

The beauty of the film however does not lie within the plot. Or really within the sex even. Behind The Green Door turns out to be nothing more then a art film with tons of experimental ideas which take place in front and behind the camera. Of course we do have the sexy stuff with scenes of the "Black Stud" played by the awesome leotard wearing, face painted Johnnie Keyes and a wild orgy which displays every kind of taboo from huge naked fat women to chicks with dicks but even most of the sex scenes turn out to be very artsy with outrageously colorful and almost psychedelic cum-shots and we even get a trapeze sex act.

Behind The Green Door is a must see for anyone with any interest in adult cinema from the 70's and I would even go as far as to say for anyone who loves 70's cinema in general. Check it out for a weird time with clowns, sodomy and men diving into vagina's. The film is guaranteed to leave its impression on anyone with half a brain. 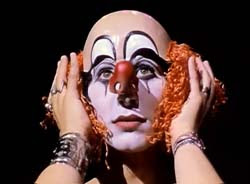