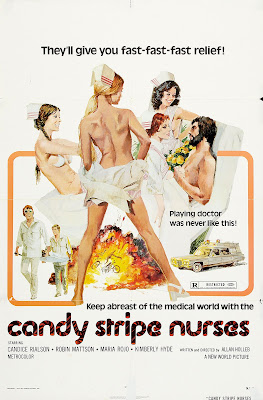 Average 70's sex comedy about three girls who work as (Yes you guessed it) Candy Stripe Nurses. The movie doesn't really follow one particular story line. Instead its kind of all over the place. We have a Spanish babe who is a bit of a rebel. She likes to fight and she eventually falls for a Spanish guy who was framed for a gas station robbery and shooting. Then we get this short haired artsy-fartsy type babe who falls for a junkie jock. Last but not least we have a nympho blond who has a thing for rock stars.

Dick Miller has a cameo as a angry loud mouth prick in the bleachers of a basketball game. "Your mother blows goats" he yells into the crowd before he has some popcorn dumped over his head.

Candy Stripe Nurses offers up lots of nudity from pretty good looking girls. We also have some streaking when a bunch of guys get naked and run through a basketball game. We have drug abuse, gun violence and even a rape scene thrown in for good measures. Still Candy Stripe Nurses is really just a time passer. There isn't anything to memorable about the movie and it really could be skipped all together but if you really like 70's sex comedies or just naked girls in general I suppose you could do much worse then this. 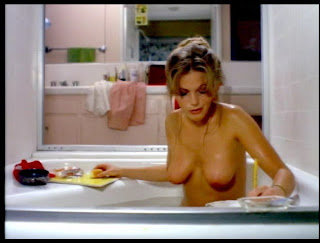