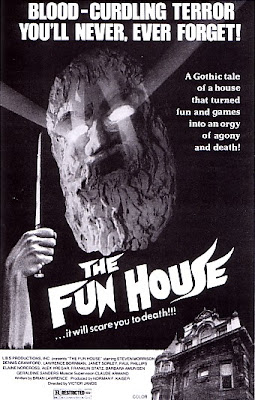 Last House On Dead End Street also known as Cuckoo Clocks From Hell a.k.a. The Fun House is in my opinion one of the greatest horror flicks of all time. There is plenty of background story to this ultra nasty cult flick from cinema madman Roger Watkins. Such as the film being cut down by hours and then going missing for decades and never really been released on video. Well fortunately for us Barrel Entertainment released this thing maybe about 10 years ago and put out an excellent DVD packed full of interviews, diary notes from Watkins, a trailer, a music video from Necrophagia, a huge book with pictures and interviews and more. 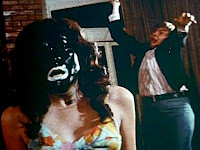 I first saw Last House On Dead End Street when I was about 15. I remember sitting there in room with the door locked, feeling like I was doing something wrong as I ventured into this strange horrifying world of Terry Hawkins, a young man (I believe he is 21) who is released from prison after serving a stint for drug trafficking. Instead of starting a new straight life Terry decides to lash out on society and shock the world with his form of payback. Hawkins rounds up a few local low life's and together they make some snuff films.

Last House On Dead End Street is notorious for its gruesome gore scenes but for me this is not where the horror is. For me this thing was so scary because of how bizarre it all was. This thing was shot on 16mm and 35mm and it is so gritty it makes Texas Chainsaw Massacre look like Avatar. The dubbing is so far out and weird and for some reason it makes Dead End Street that much more creepy. Then we have Terry Hawkins and his crew. They look like members of the Manson family and looking at it now, there is no doubt that the Manson murders inspired this thing. 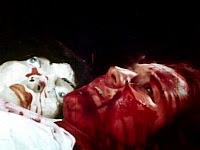 In one of the most memorable scenes a woman paints her face up in Al Jolson style Black/Face and is whipped by a midget while a bunch of pervy art fags watch in delight and her husband sits in the other room watching stag films. If that's not trashy, I don't know what is. Then we have a strangulation, some hot-poker-fu, a rotting faced blind man, very weird masks and a very strange scene involving a topless woman with horns and a cow hoove protruding from her crotch and a male victim is forced on his knees to perform oral sex on the cow hoove. This scene is weird, sleazy and creepy all at once. These are the kinds of moments that film makers should wish they could capture today. Then we have a electric drill to a eyeball and of course the real controversial scene. A woman is strapped to a table with all white sheets. First her face is slashed up with a scalpel and then her leg is sawed off with a hack-saw. She passes out from loss of blood but is woken up with sniffing salt and she sort of kicks her legless nubs around and lets out some awful screams. Then her guts are all ripped out by hand after her stomach is cut open with a pair of metal schears. Guinea Pig 2 : Flowers Of Flesh And Blood clearly tried to reenact this moment of gore genius. The camera takes a position from above the red stained white sheets and gives the viewer a very unsettling look at the gore. Id say its one of the most memorable scenes in horror history. Last House On Dead End Street also has some slaughter house footage as well with cows having their throats slashed and blood spewing all over the place.
Maybe someday some one will find the remaining footage for this thing and release it as the Fun House but until then we are stuck with Last House On Dead End Street and its a horrible thing to be stuck with (In a good way). 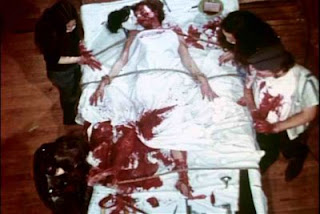