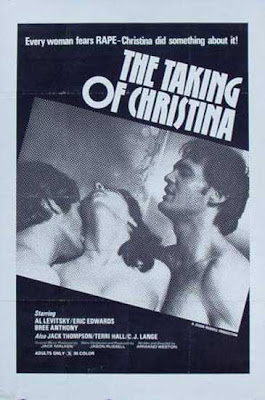 The Taking Of Christina is another 70's sickie from director Armand Weston (Defiance Of Good). This one is a rape/revenge flick that is supposed to be based on a true story. True or not its an awesome flick with ultra violence, rape and of course hardcore XXX sex.
Virginal Christina is only days away from her wedding when she is abducted by two ex convicts. She is raped and beaten by these two scumbags but in time she almost seems to be enjoying it.She convinces the traveling criminals to take her with them and she leads them into a trap of revenge that ends with a bloody mess in the snow.
Like Defiance Of Good, you really can see the talent behind this thing. The Taking Of Christina is not just your average smut flick. We get nice camera work with depressing music and we even get a decent actor here and there. Right from the beginning of the movie its obvious that this thing is going to end in tragedy and fortunately for us it does. It ends with a shotgun blast to the face. One of our rapists even has his penis blown off with a exploding crotch squib. Another man is stabbed to death and Charles Bronson even appears in a sex scene in a giant poster on the wall. Bronson's mustache and wrinkly face is exactly what the people need during a filthy orgy.
I watched this one with a bunch of friends and everyone was cheering on the penis-wound revenge scene and of course Bronson's big appearance in a 70's porn flick. This just goes to show that adult cinema was and still should be so much better then the crap that these money hungry rapists put out today. Grab a few friends and a few cold ones and check this one out for a filthy good time. 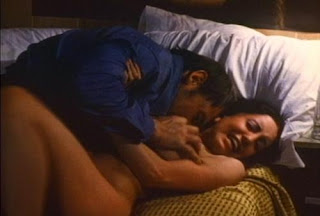