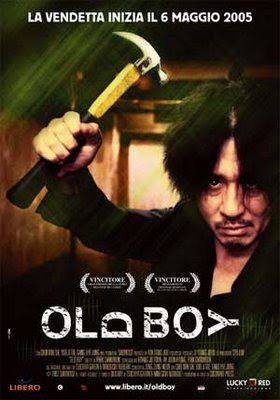 Oldboy is by far the best in the Chan-Wook Park Vengeance trilogy. Its the story of Dae-Su Oh, a man who is drugged and locked away in a prison for 15 years. During these 15 years of hell Dae-Su Oh attempts escape, suicide and trains his body and mind for the revenge he will seek out when he is free.  "I'll tear them limb from limb and nobody will ever find the body because I'm going to swallow every last bit." Once Dae-Su Oh is set free he first needs to track down the "dick-shits" that did this to him. Once he finds his enemey he has to chose weather or not to kill them or find out why they did this to him.

Oldboy is very violent with scenes of tongues being cut out. Teeth being ripped out by claw hammer. Heads being smashed with hammers. Stabbings, pipes and bats being used in big rumbles, Kung-Fu, dismemberment, gun-fights and head shots complete with red splatter. We also get to see Dea-Su Oh eat a octopus while its still alive and the tentacles slap his face as the animal tries to escape its death by being eaten alive. The actor really did eat this octopus alive and the scene is extremely vile. Along with all the nasty violence and strange happenings Oldboy has a very down feel to it. With a very dark depressing mood and some pretty nasty subject matter, involving lies, deception, incest and suicide.

Despite the depressing tone and dark subject matter, Oldboy still manages to be a beautiful work of art with amazing camera work that not only shows off beautiful shots but also adds to the story. The suggestive camera angles only serves to make the brilliant script stronger. In other words Oldboy is a Cinematic genius in every sense of the word. From the story to the cinematography and from the entertaining action to the incredibly sad tone.
Oldboy is a movie that really should be seen in its original Korean language with subtitles to be appreciated. I watched it for the first time dubbed recently and the dubbing really takes a lot away from the over all experience. 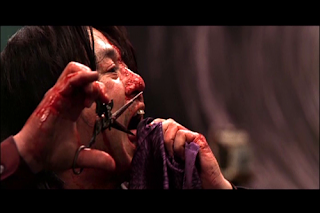 Email ThisBlogThis!Share to TwitterShare to FacebookShare to Pinterest
Labels: Oldboy