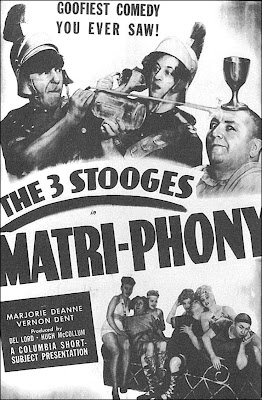 Get ready for a bit of sexism with The Three Stooges in Matri-Phony. Set in ancient Rome Moe, Larry and Curly find themselves in a bit of trouble when they are arrested for being "Girl hoarders".

Emperor Octopus demands the fairest red-head in all of Rome and the Stooges were caught hiding her. Luckily for Moe and Larry emperor Octopus needs eye glasses. They break the glasses and disguise themselves as Roman guards. Notice I left Curly out when I said Emperor Octopus needs glasses. Poor Curly pretends to be the half blind emperor's new bride and in the funniest moment Moe tells Curly "To get sexy" for the emperor Octopus. Curly is chased around the bedroom by the horny emperor and we are treated to some sweet talking romance and naughty pinching. Curly definitely steals the show and gets all the best gags. In one of my favorite scenes Curly deviously plucks the leg hairs from a guard. Ouch! Check it out and see The Stooges poison an old drunkard, get speared in the ass, go to war with a crab and run amok in ancient Rome.