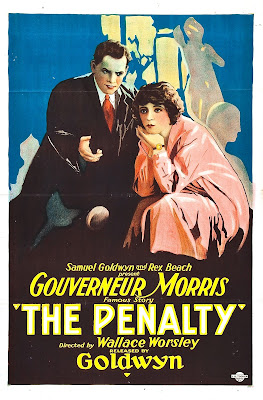 Now this is a fucked up movie. Its almost impossible to believe they could make such a cruel movie in 1920. The Penalty is a crime film filled with gangsters, murder, violence towards women, junkies, drunks and even full frontal female nudity. 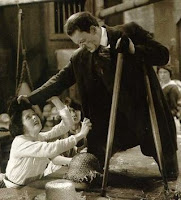 This silent film is amongst the first of Lon Chaney's full length features and he does an amazing job as always as Blizzard, a ruthless gangster who had his legs chopped off without reason as a child. He grew to hate mankind and the city of San Francisco where he made a name for himself in the underworld as a crime lord.

Blizzard is plotting out a violent revolution where his followers will loot the city and leave large portions of it on fire. He dreams of his revolution in great detail and we witness the police and other people of the city dying.

His plans shift gears when he learns that the daughter of the doctor who took his legs is looking for a model for her next art project. Now Blizzard lives only for revenge and to crush the soul and lives of those who destroyed his.

The story couldn't get much darker and for this reason I completely loved the movie. Blizzard believes that he resembles Satan and that he will leave a vicious mark on the society that did him wrong.

In one of the most memorable scenes a junkie brutally stabs a woman to death in the middle of the busy city streets. We are also treated to a few shoot-em-up scenes and some violent cripple-fu. For this role Lon Chaney tied his legs behind his back and hobbles around on his knees. This was extremely painful for the actor but it doesn't show. Chaney is a master of his craft and you really believe that he is an amputee.

The only disappointment in the film is the last couple of minutes. It suddenly changes in its moral fiber and leaves off on somewhat of a nice note. Other then that The Penalty is a must see for anybody who likes Chaney, silent film or just cold blooded extreme cinema.