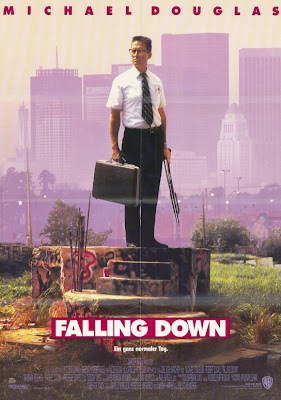 Falling Down although a Hollywood flick from the 90's that is still watchable for fans of exploitation films or at least if you grew up with it. It is over the top and while a bit morbid but not overly violent it still manages to hold a certain sense of humor that will stick with the audience long after viewing. It is also one of the few movies that will play on television occasionally that I don't mind watching.

Michael Douglas plays a disgruntled business man who is about to go over the deep end. He has lost his job, lost his wife and he is ready to lash out on society. While he is clearly insane the viewer can't help but identify with his psychotic philosophy and ideals.

I have never been a fan of Michael Douglas and this is probably his only movie that I can sit through. However his performance in Falling Down is entertaining. You can't help but to enjoy watching a man in a suit and tie going on a rampage with a baseballbatt, butterfly knives, automatic guns, and a fucking rocket launcher.

Robert Duvall (Apocalypse Now) plays a police officer who is due to retire the day that the man in the white shirt and tie goes on his violent rampage against society. Duvall is always one step behind the man with the tie as he smashes up a Vietnamese deli, kicks the shit out of gang-bangers, shoots up fast food restaurant, kills Nazi-scum and initially goes after his ex wife and daughter. All of these scenes are high in entertainment and at the same time hold a certain social commentary that I think many Americans can identify with.

If you haven't seen Falling Down you probably grew up under a rock or something. It makes for a good movie to watch with drunken friends. Its chock full of memorable quotes for everyone to yell at the screen while you chug-a-lug of your favorite alcoholic beverage. "No... I'm an American, You're a sick asshole!"

Email ThisBlogThis!Share to TwitterShare to FacebookShare to Pinterest
Labels: Falling Down