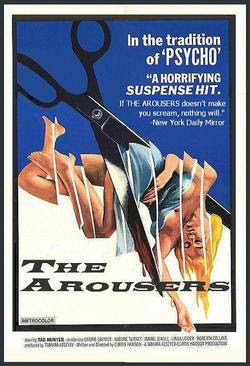 Originally released as Sweet Kill and then later as The Arousers with some added footage of nudity that doesn't really match up or make any sense. This thing has got to be the most awkwardly silent movie ever made. With little to no soundtrack and for that matter little to nothing going on The Arousers makes for a good sleeper. 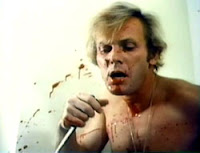 The bare breasted women is the extent of your viewing pleasure here. 50's "Sex icon" Tab Hunter plays a sexually frustrated gym teacher with a really bad temper. He enjoys peeping in the windows of naked bathing beauties and picking up chicks. Once he gets the girls into the sack he is forced to kill them because he is impotent and he can't ruin his good rep. by letting the girls know that he is not a shower or a grower now can he?
Aside from his penile dysfunction Tab Hunter also has some mommy issues going on in this one. Well I would assume he has some mother issues anyway due to his weird and unexplained flashbacks. His back story is never explained nor is his mother complex. All we know is that his mother walked around in the nude and dropped her earrings. I do not know if this earring business was as traumatic to our golden blond killer as the film makes it seem but it just might be the problem in our heart throbs pants.

Angus Scrimm from the Phantasm movies also shows up but doesn't add any charm to the movie. I could recommend countless impotent, prevy, slashers from this era but unfortunately The Arousers is not one of them. Skip it and check out Forced Entry (1975) with Tonya Roberts instead.

Side note : The director of The Arousers went on to do a bunch of shitty Hollywood movies like 8 Mile and such but he was also responsible for personal guilty pleasure of mine called Evil Town which sports more gratuitous nudity. 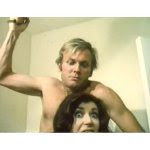