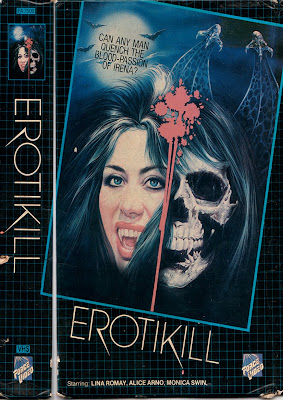 Jesus Franco was one of the busiest men in trash cinema. In 1973 alone he did 11 films. Female Vampire is probably the most popular of that 11.

With Franco films like Female Vampire you shouldn't expect much as far as dialogue and plot goes. Instead you will be treated to shit-loads of full frontal nudity. Sporadic monologue that sounds more like poetry, lots of close ups on nature and a surreal, dream like pace.

The film opens up with Lina Romay walking through the fog with nothing but her cape, belt and boots on. As she gets closer to us the camera focus's in on her finer points. Breasts, butts and bush there is plenty of. That's a promise. After all one of the many alternate titles for Female Vampire was The Bare Breasted Countess.

This Female Vampire "Sucks the life, blood and semen" from her victims. So we have plenty of scenes of oral shenanigans. She also indulges in lesbian acts as well and in one of the sleaziest scenes Lina Romay in munching away at a victims box. When Lina lifts her head from the dead girls genitals goo drips from our Female Vampire's mouth.

Then we have a bunch of scenes of Lina spreading her legs for the camera. Its nice to have an actress who isn't vagina-shy. We are treated to scenes of Lina humping the bed, hard wooden objects and even humping the bloody bath water. As I mentioned before there isn't much talking in this one. Our lead vampire is actually a mute. So she makes up for the lack of communications with straight up genital-fu.

The Female Vampire starts to shift gears with the introduction of Jack (Pieces, Succubus) Taylor's character. Jack Taylor falls in love with the thousand year old vampire and from here on it plays like an nihilistic love story.

Jack Taylor's character is suicidal and doesn't want to go on living. He begs Lina Romay to take him with her to the dark side "Beyond the mist". It all finishes with a sensitive yet downbeat climax.

Female Vampire is typical Jess Franco in the sense that there is nothing typical about it. Most would despise the film but fans of artsy-fartsy Euro-trash type stuff might just enjoy it.