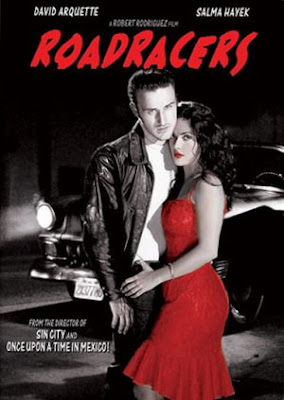 Roadracers also known as Bad Boys Never Die and Rebel Highway is the second feature film from Robert Rodriguez who is now known for his modern examples of big budgeted exploitation style cinema such as Machete and Planet Terror. The weirdest thing about Roadracers is that it is a made for television movie. 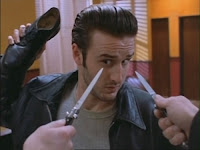 Its not often that a television movie is worth a shit and in the 90's it was unheard of but Robert Rodriguez delivers the goods with this throwback to 50's road-rebel movies. The directors love for rockabilly really shows in this greasy look at natural born American rebels.

The soundtrack sports shit-tons of Link Wray And The Wraymen, Gene Vincent And The Blue Caps, Hasil Adkins, and a bunch more. The highlight of the soundtrack for me is that they threw Ralph Nielsen's Scream! into the mix for a bad-ass driving scene. That song always puts the image of reckless kids in my head and in this movie it makes for one hell of a nihilistic scene.

Nihilism is the basic message here. The dark story follows a young rock & roller who is into cars, guitars and his girlfriend played by the always sexy Salma Hayek. Our anti-hero's father was run out of town years ago by a crooked cop and now the police have it out for the younger generation. Our greasy main character needs to make a decision whether or not to pursue his life dream of being in a dangerous rock & roll band or following in his dads footsteps down a violent road of rebellion. I won't spell out for you which path he takes but lets just say it is the more cinematic one. Roadracers comes complete with teenage knife fights, great rock & roll, fast cars, violent shoot outs, self induced pain (complete with switchblade through the foot), rumbles in the roller rink and a sexy Spanish lead actress in tight sweaters.

For me Robert Rodriguez is hit or miss. His style is somewhat unique but I can also find it a bit annoying at times. I prefer the directors throwback movies to a better time in cinema, like this! 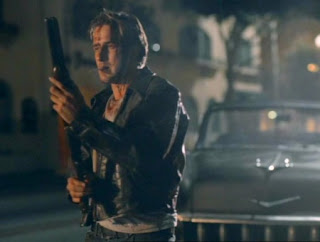