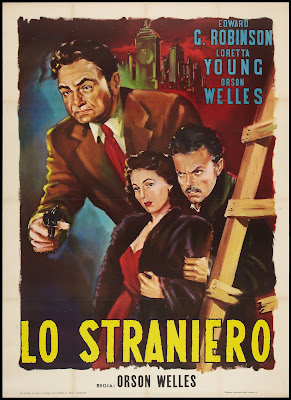 Not to be mistaken for that shitty movie with Liv Tyler The Strangers or for that matter the countless other titles of the same name. Nope this is Orson (Citizen Kane) Welles Film Noir all the way through. 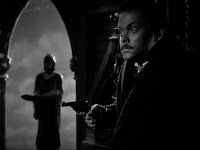 Orson Welles plays professor Charles Rankin a man with an abnormal obsession with clocks. His beautiful wife played by Loretta Young is brought in by Mr. Willson, an investigator for War Crimes. Mr. Willson believes Charles Rankin to be a Nazi who goes by the name of Kindler who was responsible for mass genocide and horrible atrocities in Nazi Germany. If Charles Rankin is in fact Kindler many lives will be endangered to keep his identity secret.

Orson Welles does an excellent job in direction and in acting as usual. As the character of Charles Rankin who is clearly genius and insane at the same time gives off emotion of paranoia and hatred at the same time. The cinematography is excellent as always. Camera angels, shadows and even the pace all play a big part in The Stranger.

While The Stranger may not be the masterpiece that Citizen Kane was or show off the genius eye of Orson Welles to his fullest as could been seen in movies like Touch Of Evil it is still a fun watch for anybody who enjoys film as art.

While The Stranger is a very talky movie it all comes together with a heart pounding climax. That will keep you at the edge of your seat. We have some 1940's style shoot outs, a man falls from a church tower and we have a very memorable stabbing that has to be seen. Its almost hard to believe that somebody had the balls to shoot this death scene in the 40's. Especially from somebody with a huge name like Orson Welles.

The Stranger can only really be recommended to Film Noir buffs and fans of Welles. Alfred Hitchcock fans are also sure to enjoy this movie. So check it out if you are in the mood for something with a bit of class.

Email ThisBlogThis!Share to TwitterShare to FacebookShare to Pinterest
Labels: Film Noir, Stranger (The)