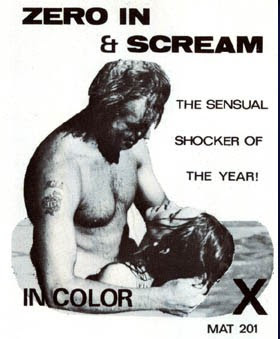 Lee Frost is always good for some classic exploitation in bad taste. The director is responsible for such filthy titles as House On Bare Mountain, The Black Gestapo, the great Defilers which he teamed up with fellow exploiteer David Friedman, The Thing With Two Heads, Love Camp 7, Ride Hard Ride Wild and many more.

The truth is Zero In is one of the worst movies I have seen in a very long time and it is a pretty painful sit. It follows a pervert serial killer who uses his high powered rifle as a weapon of choice. He likes to Zero In on couples having sex and pulls the trigger on the man. This of course is just an excuse to show lots of full frontal female and male nudity alike. The sex eats up the majority of the running time and the kills are pretty dull too. Another down side to this one is how quiet the film is. We have some music to fill the sex scenes but other then that there is barely any speaking. From time to time a news cast will update us on the sniper killer but other then that we get one long ranting from the killer where he shares his stupid ideas on women and how they should remain innocent.

It all comes together with a really bad twist ending that doesn't make any sense and will leave you scratching your head and wondering why you do this to yourself. Stay away from this movie unless you enjoy torturing yourself. 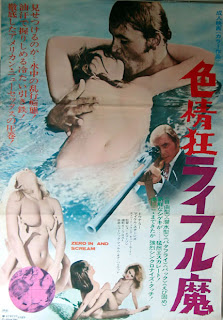