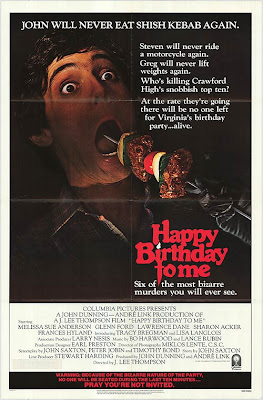 The exploitative poster boasts "Six the most bizarre murders you will ever see" and while this isn't necessarily true it certainly grabed my attention when I was a young horror-hound in the VHS days.

This 80's Slasher follows a college girl named Virginia who runs with an elite group of yuppies who refer to themselves as "The Top Ten". Luckily for us these rich assholes start getting killed one by one by an unknown killer in true 80's stalk and slash fashion.

While the movie could have sported some more naked flesh it does offer up severed heads, stabbings, a very cool kill which shows a mans neck scarf being thrown into the moving spokes of a motorcycle. Naturally his face is pulled into the spinnng wheel and comes complete with a bit of splatter. This scene would be ripped off in the horrible Pet Cemetery Part 2. We also have a ridiculous kill with a shish kabab stick as a weapon of choice. Of course this is the moment that the poster so proudly exploits. "John Will never eat Shish Kabab again". Then we are treated to some gory open brain surgery which is pretty damn graphic and might get a squirm from the less jaded of viewers.

It all starts to come together when we learn how twisted Virginia and her family really are. They have some serious birthday party hang ups and in the films climax we are invited to a party but this party is pretty fucking dead if you know what I mean.

The director of this film is known more for his Charles Bronson escapades. He was responsible for titles such as the great 10 To Midnight which I suppose was the closest he ever came to doing a horror movie other then the one in discussion. He would also do The White Buffalo, The Evil That Men Do, Death Wish 4 and a bunch of other Bronson flicks. For someone who wasn't particularly in the horror genre he does a pretty good job on this one.

Not to be mistaken for Bloody Birthday which would come out in the same year.